I still get the feeling I’m having those dreams again. The ones where I am seeing someone I know or something that doesn’t make sense and then it becomes something later on. You know what I mean right.

I once had a dream this week that I was talking to Tommy Thayer in a hallway. I don’t know what we were talking about but we were talking for the entire dream. I wonder if that relates to the fact that he’s having meet & greets before each concert here in Canada. Speaking of which, KISS played in Winnipeg last night, my grandma’s hometown. I think they’re going to Sudbury next, then Ottawa and then….TORONTO!!!! Just seven more days of waiting. My friend took my Tommy Thayer dream and turned it into a love story where Tommy takes me on a spaceship and well…..I don’t think you want to know what happens next. Nothing sexual though. Okay he thinks I like Tommy now. Do I? Well I don’t know, he’s talented, he’s actually quite good-looking for his age, and he’s very kind too. I really wish people would respect him whether he’s dressed up as a Spaceman or not. However why would I dream about Tommy when Ace is the one I have a crush on when it comes to Spacemen? I don’t know. But Tommy’s not bad. 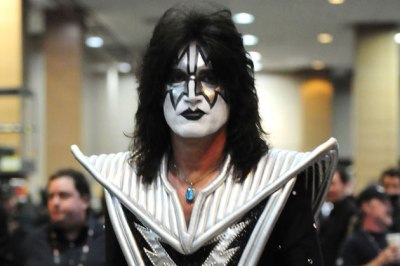 ^ No hate allowed is that clear? Yes he’s wearing that makeup but I wish people would stop complaining and get over it. I really like this picture of Tommy, it’s….well I haven’t actually found the right word to describe it yet so it’s in between the word “handsome” and the word “sweet”

Anyway, I had another dream I remember it occurred on the night I watched the season finale of Defiance. Amanda Rosewater is no longer mayor and Irisa seems to have sacrificed herself. I would love to review the first season of this show but it’s a pretty complex show with a plot that is tricky to follow. It wasn’t until the last four episodes of the first season when a more complex storyline was put together. The rest of it was a bunch of different subplots along the way. But what relates to the dream is that I was trying to help Amanda escape some angry politicians that looked human but they were not. I sprouted wings and took her up high because they would not be able to catch us. But then we were shot down and we crashed. I woke up at that time. Seriously I love it when I have dreams where I can fly, it makes me feel free.

That’s it for now, more homework to be done. My psych. test I wrote yesterday and the mark is expected to appear on the site sometime today. Fingers crossed that I did good on it.