So you know I’m a Child of Ghost now, I have both their studio albums and I will get the EP next. I would post two big reviews on each album but since it’s only two I think I’ll give you all my thoughts on both of them in just one entry so here you go: 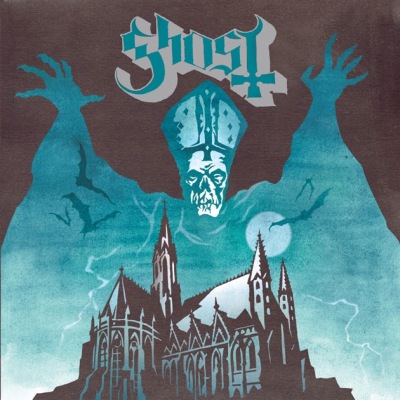 Opus Eponymous as they call it; I was drawn onto the name quite quickly and I’ve always wondered what it means. But Ghost is known for having quite a few song names that are in a language that I don’t know. I think it might be satanic (given that their songs are about that) The first track started off like something you’d hear in a church, however that’s not familiar to me since I do not go to church. The next track titled Con Clavi Con Dio, sounds like something you’d want to hear at the beginning of a concert if you were seeing Ghost live. (now believe me, I want to see them live now as well but I think you knew I was going to add them to my concert bucket list now didn’t you?) The fast beat drew me in instantly. My two favourite songs on this album are Ritual and Stand By Him. Very good tracks, melodic, mysterious, dark, and unique. I was guessing Elizabeth was going to be about the Blood Countess; I knew I was right as soon as I heard the word “countess” mentioned. The ending to Genesis was unexpected but well this is the way the band is, unexpected with everything they do.

Infestissumam the latest which I bought yesterday I think I liked a wee bit more than the last one. There were more than two tracks that I liked on this album. While some of the songs were rather soft and mellow the others were a little more intense. That is the unique thing I found about this album. Going back and forth between two different musical tempos of doom metal. My favourite tracks are Secular Haze, Year Zero, Body and Blood, and Monstrance Clock. The most dark and melodic tracks on this album. I found Ghuleh/Zombie Queen to be a rather strange track and this afternoon while I was cleaning the house I had the song stuck in my head and kept asking myself what does “Ghuleh” mean? Question of my life. Over all, I’m quite satisfied with this album, it was totally worth the wait when I ordered it at the record store a week ago. Now I want the EP.
I haven’t been in the Ghost fandom very long but since it’s grown on me pretty fast since the band has not released a lot of records yet, I feel already deep drawn into being a child of Ghost already. A devoted one, just like with any other band I love. With most bands it usually takes a while for the love to grow. With Lordi it was like, starting with two songs and three albums until I was in love with the band. With KISS it took buying a bunch of records and absorbing myself in the tunes and a live concert which made me devoted. Same thing with Megadeth but without the concert part. With Ghost it was like instant love for the band right away, I don’t know how it happened but it did. You know me, I love bands that are unique in how they play and look. Now next time I write about Ghost I would like to write about my thoughts on what it’s like to be a fan just like I did with Lordi and KISS. Normally I don’t do those types of entries until I’ve gone deeper into the band, but with Ghost it’s happened so fast I’ll do it next time I write about them. Stayed tuned.
-Emily