The first episode ever made in the whole saga and the first I ever watched. I remember I was only 6 years old when I saw it, and after seeing it I liked it. I wish I could remember what it was that caused me to instantly become a fan after seeing this one.

So it’s probably been like, I don’t know. 1 or 2 decades since the events of the last episode. A whole new story, new enemies, new characters and all that shit. Yeah you get it.

The Empire now rules the galaxy and there are the new good guys who are the only ones who want to stop the Empire and they are the rebels. So we’ve got a new war going on. The leader of the rebels is Princess Leia, daughter of Anakin and Padme (I have no idea why she is referred to as a princess. She was raised by Senator Oragana and is a member of the Imperial Senate to Alderaan so I guess that’s how she has royalty in her) Anyway, she’s got plans to defeat the Empire which she gives to R2-D2 but then she’s captured and R2 escapes onto Tatooine with C3PO. Then we’ve got Anakin and Padme’s son Luke living with Lars who meets Obi-Wan and the two of them get the help of Han Solo and Chewbacca to go to Alderaan. I couldn’t sum this plot up really well as I write this; I think it’s due to the fact that we have two things going on here that don’t come together at first, but anyway I think Luke made the right choice to learn the ways of the force from Obi-Wan to become a Jedi after he witnesses his home and only family known to him destroyed.

So many new characters, so I’ll start with Leia. I think she was my first favourite Star Wars character over all in the whole saga. Yes she starts out as a damsel in distress in this movie but I wouldn’t be disappointed because all the while when she was captive at least she tried to stand up to the Empire. To Vader and Grand Moff Tarkin. Also as soon as she is rescued by Luke, Han and Chewie she begins to fight back. We’re also introduced to Luke Skywalker who is living on a farm on Tatooine with Owen Lars and his wife Bureu. Luke seems to be the kind of young man who is eager to leave his home. He becomes even more wanting to get out when he buys C3PO and R2-D2 and discovers Leia’s message to Obi-Wan. I had a feeling Obi-Wan would be hiding somewhere. He goes by the name Ben to hide his identity, and I figured he would be defeated in this movie. Han and Chewie I found to be the ones who like to do things there way when it comes to combat and doing people favors. Han’s happy in the end if he gets what he wants which is mainly money. But I must admit I love his ship the Millennium Falcon, she’s a beauty. Yes I have a lot to say about characters, I never got around to my thoughts on Threepio and R2 so I’ll say that I like their friendship but I find that Threepio’s always trying to start an argument. R2’s the smart one. He always knows what should be done to like escape the ship, use the com-link whatever you call it and yeah.

Enter the Death Star. (I think I like the look of the second one better than the first one) but this weapon that it has (both of them) is completely badass if it’s powerful enough to destroy a whole planet. When Alderaan fell I thought that I would never see what that planet looked like ever again until they showed a small part of it in the last episode. This Death Star was pretty powerful but I still like the second one better because even though it was incomplete that made it look sicker for some reason and the laser too was still able to fire. You know for a space station I almost found it hard to believe that it can move and I thought how does this thing even move? It almost destroyed Yavin where the rebel base really was and that had me on the edge of m seat once again.

This garbage scene I thought was close to brutal when I was a kid. Now I look at it and think it was necessary to escape the Stormtroopers. But when I was younger I was freaked out by that thing that pulled Luke under the water. According to Wookiepedia that creature is called a Dianoga. They’re much bigger than they look and the thing is once you watch your way through this episode and the next two you’ll find that Luke ends up encountering different monsters in each episode. A Dianoga wasn’t that scary in the end though. The monsters in the next two movies were even scarier to me when I was a kid. There’s always a unique clever way to escape a room when the walls are going to collide but in most cases the people trapped in it escape themselves instead of waiting for someone to disable it. But then again it’s a lot harder to escape yourself if there’s a ton of garbage in your way.

I find TIE Fighters to be really cool and sometimes I’m thinking they must be so much harder to target because they’re smaller and faster than those Y-Wing and X-Wing fighters the rebels had. During the battle to destroy the Death Star, I thought it was clever the way they decided to destroy it. Turns out that a couple of TV shows have spoofed that fly down that trench and fire torpedos into the exhaust port to destroy it. There was an episode of the Powerpuff Girls where the girls had to destroy this giant disco ball eclipsing the sun. Bubbles, the softest of the three destroys it by flying down that trench with the Boogie man on her six in his spaceship. (the sound of his guns sound the same as the guns on an X-Wing fighter!) She evades him, fires laser beams into the exhaust port and the disco ball explodes just like the Death Star explodes in this movie! So as you can see this space battle in this movie is pretty damn popular even though I prefer the one in the sixth movie more. TIE fighters are still bad ass but I prefer TIE Interceptors (which do not appear until the sixth movie) and Star Destroyers. 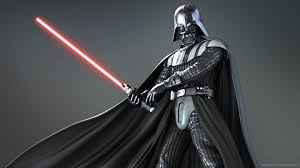 Finally, I’ll talk about Darth Vader. About time no less. So he’s no longer Anakin I get that. He makes it as my second favourite villain in the saga. He is definitely the villain that you do not want to mess with. Even his own men who serve him he will hurt them if they fail him. Hence here comes the force choke. I’d say he’s a badass, and well I never was obsessed with him but I still like him. He has some of the most memorable lines in all the movies especially in the next one. He’s very persuasive at times and then what happens is that everyone takes the suggestion he makes like at first they wanted to kill Princess Leia after the destruction of Alderaan until they found out that the plans they needed were on board the ship somewhere so he convinced his men to spare Leia for now. You know Vader, he knows how to come up with cruel plans to destroy anyone who stands in his way.
So, I’d say this movie as the one that triggered my place as a fan of Star Wars is a good start. When I was six years old I’m asking the whole time “What the hell is going on here? I actually really like this stuff, I just don’t get it yet.” Now that I do get it I like it even more. So you can say I saw the original trilogy first which most fans often view that as better (just like with KISS). Anyway, the next two movies I will definitely talk about in a little more detail like episodes 1 – 3 because I found this review hard to put together. Stay tuned.
-Emily