Hi! I haven’t put any updates that have been going on with my life lately so now feels like a good time.

I’ve been trying to keep myself occupied these days, so here’s what I’ve been doing:
I dressed up as Gene Simmons for Halloween this year, and got a few stares from the kids. But one of them complimented me and he said, “Hey, you’re from KISS!” I asked him what I do on stage he said it was the tongue. So I wiggled my tongue for him. I can pretty much do it just like Gene now, my hidden talent!

As a Halo fan I sometimes buy action figures. All of my Halo action figures are Elites. I have a statue of Thel ‘Vadam, a standard Combat Elite and two Halo Reach Elites but my prized possession of my Elite figures came home last month, yours truly Rtas ‘Vadum.

I didn’t think he was going to come home that quickly. He arrived two days later upon the order placed and I love him. I’ve wanted to buy him for quite some time but never got around to it until now. I still remember the day he came in his package, I ran to my room and opened him out and felt the urge to giggle and shout. YAY! RTAS VADUM IS HOME!!!! But I saved those words for my Instagram. He’s one of a kind indeed. I have written two songs for him and I still love him so much like I love Optimus Prime. I would kill to meet his voice actor Robert Davi. However, he’s done tons of movies and he’s a singer now so I don’t even know if he remembers doing Rtas’s voice. Rtas wasn’t a very big role. But maybe approaching Mr. Davi in silver Elite armor and a replica energy sword might restore his memory being that character. I’d definitely ask him to say one of the two favourite lines by Rtas that I love.

In other news T- 2 weeks until I see GWAR! 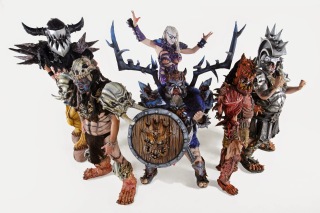 Remind me to buy a white shirt this weekend because I don’t want any of my good clothes soaked in blood. It’s probably just water with red food colourin. Stage blood like the kind Gene Simmons uses would damage Gwar’s costumes. Note to self: buy a tour shirt. It’s at the Opera House this time. I wonder what Blother sounds like, maybe not as brutal as Oderus but brutal enough to get me screaming. If they kill anyone on stage I want them to do Megan Fox. I have my reasons…

I’ve been seeing constant Halo ads on my Facebook for a change about a replica plasma rifle. Cool but not for $600. I would rather have a replica energy sword that glows in the dark, never runs out of power and is a bit cheaper.

Oh and one last thing, I really hope to get Omega Ruby for Christmas because the original Ruby game was my childhood. I really should make an entry on Pokemon but there’s so much to it I don’t know where to start!