I have planned to write about this, and I was finally reminded upon seeing a photo collage of Optimus over the years of the movie series in Transformers, 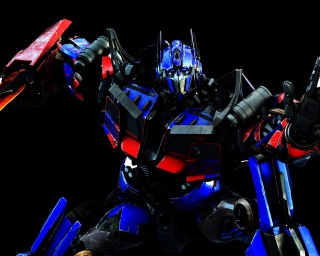 This Optimus was compassionate to all living things and did not kill unless absolutely necessary. He was always very self-sacrificing. This is the Optimus that I fell in love with, he is the one who helped me find my own identity when I was a teenager. He helped me decide that I wanted to be unique rather than blend in, be my own person, dare to be different. The result, I fell in love with this Optimus shortly after I became the person I really was destined to be. I learned to be more compassionate to nature, be different, and so on. Even though I never grew up with the G1 cartoon, I could tell that this was the Optimus that also existed in the G1 and all the other animated series that came afterward. If only this Optimus continued to exist, but sadly that wasn’t meant to be….

2. Revenge of the Fallen 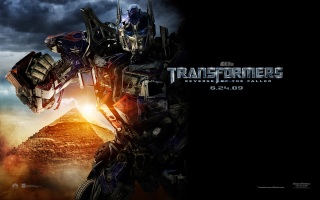 In Revenge of the Fallen, starting at the forest battle just before he is killed, at first Optimus seemed to still have his compassionate side but unfortunately, right around the time he dies, I couldn’t help but notice that he was starting to become more aggressive. Ripping Grinder’s face off and then brutally killing the Fallen after being revived. I still had my faith that the Optimus I loved still existed but there were doubts coming in, especially after witnessing those two scenes.

At this point Optimus has moved even further away from the Optimus that I love, and the first sign to indicate that was the scene where Mearing comes to talk to him and he’s angry. He didn’t really sound angry when he spoke, because I was expecting his voice to be more raised. Anyway, he sort of went back and forth between being compassionate and being violent, especially when he and the Autobots were going to “depart” Earth and he speaks to Sam one last time. But I knew something was really wrong when they returned in Chicago and he said “We will kill them all,” at that time I’m like “What’s going on, Optimus wouldn’t say something like that”. So that was a bad sign obviously. If you read the movie adaptation novel and comic (I read both and to be honest I liked the comic better than the novel, the novel just had many parts in it that I thought weren’t necessary except for the parts written in OP’s perspective……….Actually I read two different versions of the novel, a junior novel that kids would read, and a more mature novel.) also I’d like to note that in those two books, at the very end, Optimus kills Sentinel, but spares Megatron when he comes in to help defeat Sentinel. It’s almost as if Megatron and Optimus make peace and then Megatron leaves. So the compassionate Optimus was put in the books, but in the movie it’s completely different. We have the violent Optimus during the final battle. He fights aggressively until he loses an arm, and then Megatron comes in to save him, but instead Optimus kills him by ripping off his head with his axe, totally merciless. From seeing that I knew, that it was true. Optimus wasn’t Optimus anymore. 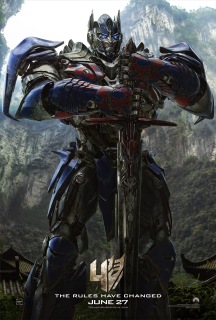 After the events of DOTM, I wasn’t completely confident that Bay was going to bring something good out of this movie, but I try to keep an open mind and I wanted to see it anyway, because hey, I’ll always be a Transformers fan (or TFormer as I now like to call it). One thing I really wanted to see was that Optimus had two arms again, and he did. His new look was badass, but I wasn’t warming up to it too much. He seemed to be more firm than compassionate when not fighting, like the time he would speak with Cade. He would point his guns at humans at times, and I was not crying but I was actually angry when I saw him say some really aggressive things. Example: “They killed Ratchet, I will tear them apart!” Okay that is not Optimus at all! Michael Bay, what have you done? Now, the truth is, I do not remember anything else aggressive of Optimus doing other than that line, and when he shoots this one human who goes after Cade near the end of the battle. That’s only because I have only seen this movie at least once all the way through because, I didn’t like it that much.

So to summarize, Optimus was the Optimus I loved in the first movie but then he began to deteriorate over the course of the movies after that, up until I did not recognize him anymore. Now, I understand that perhaps part of his aggressive personality now, is due to the fact that the war continues, and then after that the humans are now completely against them when there was way too much devastation in Chicago.

But the Optimus that I fell in love with would never kill for no reason, he only kills if necessary and gets calm in most situations acting only aggressive when he needs to.

I guess you can say, that’s why I started watching Transformers Prime and the G1 because Optimus was always Optimus in those series. When I meet Peter Cullen this summer, I am thinking about asking him how he feels about Optimus becoming so violent in the movies. I wonder if he even likes that. Who knows?