I’ve always been a Transformers fan with high expectations, especially after I learned that the movies weren’t as great as they seem. I haven’t watched the entire G1 series but I’ve seen enough episodes to become more familiar with classic characters. My love for it over the movies was put in place once I started playing Transformers Devastation. 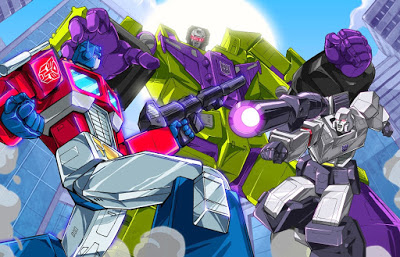 Another great Transformers game with a classic Autobots vs. Decepticons story and no big fat plots! This is what should have made it into the movies. Rise of the Dark Spark wasn’t that great. Fall of Cybertron was good. War for Cybertron is another favourite of mine (and I went into deep lore review on that one), and now this one joins my list of favourite stories in the TF lore.
It’s a pretty straight forward story, Megatron finds an artifact and wants to use it to cyber-form Earth and he’s got the Insecticons to help him. What is the artifact? Something that contains data of long lost Cybertronian culture. The Autobots realize they must destroy it to save the Earth from being cyber-formed, even if it contains some of their culture inside, if Megatron intends to use it against them to remodel Earth, then there’s no other option. Aside from that it’s something you’d expect to happen on the sidelines such as Starscream getting scolded by Megatron. I really liked the idea of it being tied to Nova Prime at the very end, something tells me we’re going to get a sequel.
So where do I begin with the game itself? Well, first off I like the selection of Autobots we get to play as which are classics: Optimus, Bumblebee, Sideswipe, Wheeljack, and Grimlock. The Decepticons, we’ve got Blitzwing, Menasor, Shockwave, Soundwave, Skywarp, Thundercracker, and quite a few more fan favourites as well. It’s as if this game was designed to give the fans what they wanted out of Transformers, especially if you’ve gotten fed up with how the movies have been lately.
Many classic voice actors have returned to do their characters that we love in this game, Megatron’s still got his laugh that he had in the cartoon! 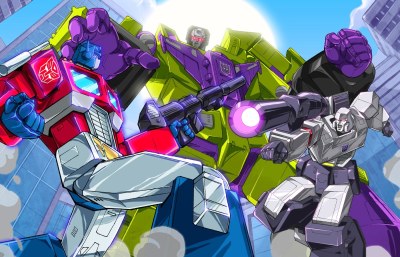 Hail Lord Megatron! (or not, since I’m an Autobot at heart)
The graphics are totally nostalgic for fans older than me, and I was definitely turned on by how unique and animated it is. We don’t really get games with graphics like these anymore, and some of the designs of locations are rather interesting for example: 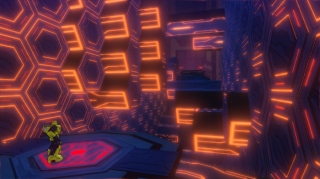 I don’t know why I like the concept of the hi-tech honeycomb here where they come out of the wall or from down below. It’s not an uncommon design in any sci-fi game or movie; whether it’s platforms, a hallway or a door, but it seems to fit it like a glove along with the other good layouts.
The gameplay is really fast-paced. I like the idea of the variety of attack combos you can use, and dodging at the right time puts everything in slow motion so you can take that opportunity to deal some damage to your opponent. You can go to the Ark between missions to modify your armory and I see they brought back a lot of classic features such as Teletraan-1. In this game I have an sudden desire to find all the collectibles, Decepticon flags, seekers, and bouncing Kremzeeks that look like tiny fireballs. The game even has some interactive features outside story and challenge mode (I still have to check out challenge mode, but right now I’m on the verge of completing the story mode as every character first, so I’ll get to that as I go back and forth between this game and Halo 5 Guardians), my favourite interactive feature on the menu is you unlock models of each character. You can rotate them, make them transform and make them say 3 phrases if you press Y. I don’t know why, but I like that.
Some of my favourite moments in the game are the battles. Many of them are intense, yet tough. The fast paced combat/quick reaction techniques makes things fun and challenging. For example, when you enter the Proudstar, you have to fight off a swarm of Insecticons with a turret. I think the most challenging parts of the game include racing to where Starscream crashed before Motormaster gets there; there are boosters for you in vehicle mode but it’s very easy to miss a turn if you are in a hurry to get there before a con does. Then there was a time I had to escape a vortex before it sucks me in.
Favourite battles? I was barely in to twenty minutes playing and I already had to fight Devastator. He wasn’t so tough, but I found Menasor to be a challenge; however I tend to look past it because he’s actually a badass, then there’s Shockwave who actually put up a decent fight as well. As much as I couldn’t stand every time he stunned me with those beams and created duplicates of himself, I still enjoyed it. Blitzwing was also a challenge due to the fact that he can change into two different forms. Variety for the win.

It’s pretty cool that we get to fight Starscream while traveling through the space bridge right? Right?
Then of course there’s the classic idea of pushing forward, fighting a shit ton of Decepticons to reach Megatron, defeat Devastator and Menasor, go back to Earth and fight Megatron, then fight him again in space to emerge victorious. That just serves as one of my ideal final boss settings. Plus I didn’t realize one of the obtainable weapons in the game was the Star Saber. Once I do another playthrough of the game on higher difficulty, I am definitely doing a full on Optimus one with my Star Saber. I have always kicked the most Decepticon butt with my beloved Optimus.
The music in the game is pretty much the icing on the cake, and once you hear it, it stays with you forever. I loved the music in this game. It’s all rock n’ roll during every battle, and my favourite would have to be at one point when you’re on Cybertron and after you escape being sucked into the core. One of my favourite non-rock music in this game is when you’re aboard the Proudstar and it sounds so dark and mysterious when there’s no battle going on.
Anything that could be improved in this game? Well, I was going to say a Decepticon story could be implemented but I am not certain. Maybe a DLC? If not then at least I asked. Sometimes camera movement is a little off and it can be really difficult to get around in vehicle mode, depending on where you are going. A good example of this is when you have to beat Motormaster in the race to the objective, but other than that, I love this game.
Have you tried it yet fellow TFormers? If yes, what did you think?
One last thing before I close this off, I have at last added a subscribe feature so you’ll get email updates from me about this site, it’ll certainly save you having to track it down if you don’t follow me on various social media.
Until next time.
-Emily