This year has been a difficult year for everyone. We’ve lost a lot of iconic people in music, movies and even video games. Earlier in the year Leonard Nimoy (best known for playing as Spock in the original Star Trek series), Christopher Lee (best known for his roles as Dracula, Count Dooku, Saruman, and more), Satoru Iwata (CEO of Nintendo, and he died so young too, only 55 years old!), and others.

Now we have lost another iconic legend in rock n’ roll.

I really need to start writing more about heavy metal, as that was the only main focus I had back in the day when I first started this blog.

Whenever legends pass away, even if I am not a hardcore fan, a casual fan, or barely know anything about them, I still like to write these because I wish to pay my respects, especially if I know people who love them more than I do.

Anyway, yesterday was a sad day for all Metalheads no matter how big of a fan you were of Motorhead or not at all.

One of my good pen pals from France, informed me last night that the frontman of that band passed away earlier that day after a short battle of cancer. Knowing my friend, he idolized Lemmy with all his heart, while I on the other hand was still getting to know the band. I had purchased Ace of Spades several months ago, and was planning to get Overkill next. Now that gives me an idea for next week’s metal song already.

If I knew about this sooner I would have done it this week instead. 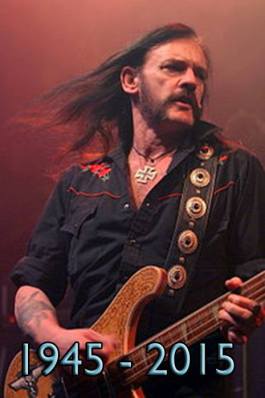 Lemmy lived up to be 70 years old, and his birthday was Christmas Eve, it’s devastating to pass away days after reaching another decade. But the unfortunate truth is that Lemmy has had many health problems all his life. You know, the usual, smoking, drugs and booze. I don’t know if he ever quit any of those. But through it all he thrived, the band toured worldwide, and became icons of rock.

He was the bass player and singer for the band. He had a very kind heart, a lot of respect for women, even though he had a shit ton of money, he chose to live like us instead of in a mansion. In many ways, he has been a good representative for the human race such us: telling us not to give a damn what people think of the choices you make, have respect, accept people’s differences, and never give up no matter what gets in your way.

In interviews, he often said he didn’t want people asking him about his health, death comes when it comes right? Brave. He never retired either, he just kept doing his thing until there wasn’t a breath left in his body. I mean, how many musicians can do that? Alice Cooper, Ozzy Osbourne, and the other members of Black Sabbath are all in their 70’s and they’re still out there rocking out.

We have been losing a fair amount of legends in rock and metal the past few years. Just last year we lost Dave Brockie. Who’s next? It’s devastating, that we are losing legends in music. What sucks is the majority of society probably doesn’t give a shit unless it’s someone who made music that you can easily dance to, regardless of lyrics and who wrote the music.

It’ll be a chilly day in hell to know that all the musicians that were part of the decades of rock will be all gone someday, and those trying to make metal today….it sounds more like noise and yelling that you can’t understand.

I like rock and metal that’s heavy but still has melody, and it was made by legends from the golden decades of the 60’s, 70’s and 80’s.

Where’s a time machine when I need one?

Rock in peace to another legend. I think I’ll go listen to that album again.

Also please go check out my friends blog who has written a tribute to Lemmy as he has idolized him for years. You can follow his blog here: Journal of a Lordi Rider