And here we are at the final Mass Effect 2 DLC before we move on to the ones from the third game.

I always save this one for last because it’s more connected to the starting events of the third game.

We get a call from Admiral Hackett that scientists have found evidence of an imminent Reaper invasion. The head scientist has been captured by batarians in the system shortly after reporting this to the Alliance.

This is obviously pretty serious stuff if they think for sure the Reapers will arrive through the mass relay where Dr. Kenson went missing. Now you get to be a lone wolf in this mission and that’s a challenge because I’ve always found the combat in this game to be the most difficult. After a few tries I managed to score the achievement of finding Kenson without being spotted. Stealth has never been my strong suit but I’m slowly getting better.
With all these DLCs we know for a fact that someone is going to betray us and/or die out of the blue.

The minute I saw the Reaper artifact out in the open in that facility on the asteroid near the mass relay; I knew that Kenson and all the scientists were indoctrinated.

If you are having visions from Reaper tech then that’s a common sign of indoctrination!

When it comes to the showdown in this particular room, it’s not as tough as it seems so long as you’re quick to react when your shields go down and stay in cover. I’ll confess, I didn’t think I was allowed to use medi-gel in this game unless one of my squad mates was down during the first time I played through this game. That was until I realized that if your HP drains but you get in to cover at the last minute. The tricky thing that I also hate about ME2’s combat system is you can’t see both your shield/barrier and HP at the same time so you won’t know how much HP you’ve lost until your shields break again.

However, in the last two times I’ve played this game, I managed to defeat all the waves of enemies and the artifact did its thing severely injuring my Femshep.

After that the combat between now and the end of the DLC is definitely challenging since you’re on your own. But basically Shepard has decided if you had to choose between blowing up a relay by making the asteroid collide with it or letting the Reapers arrive through it, what would you do?

Yeah, so I think everyone knows where this is going. After Kenson blows herself up with the reactor, I think it’s safe to say I saw that coming

Every time I get outside the facility I just want to take out my trusty particle beam and burn everyone in my path, including the mech. so I can reach the communication hub or whatever it is. Sure there are more powerful heavy weapons in this game, but I’ve always preferred the particle beam for its accuracy and capacity. 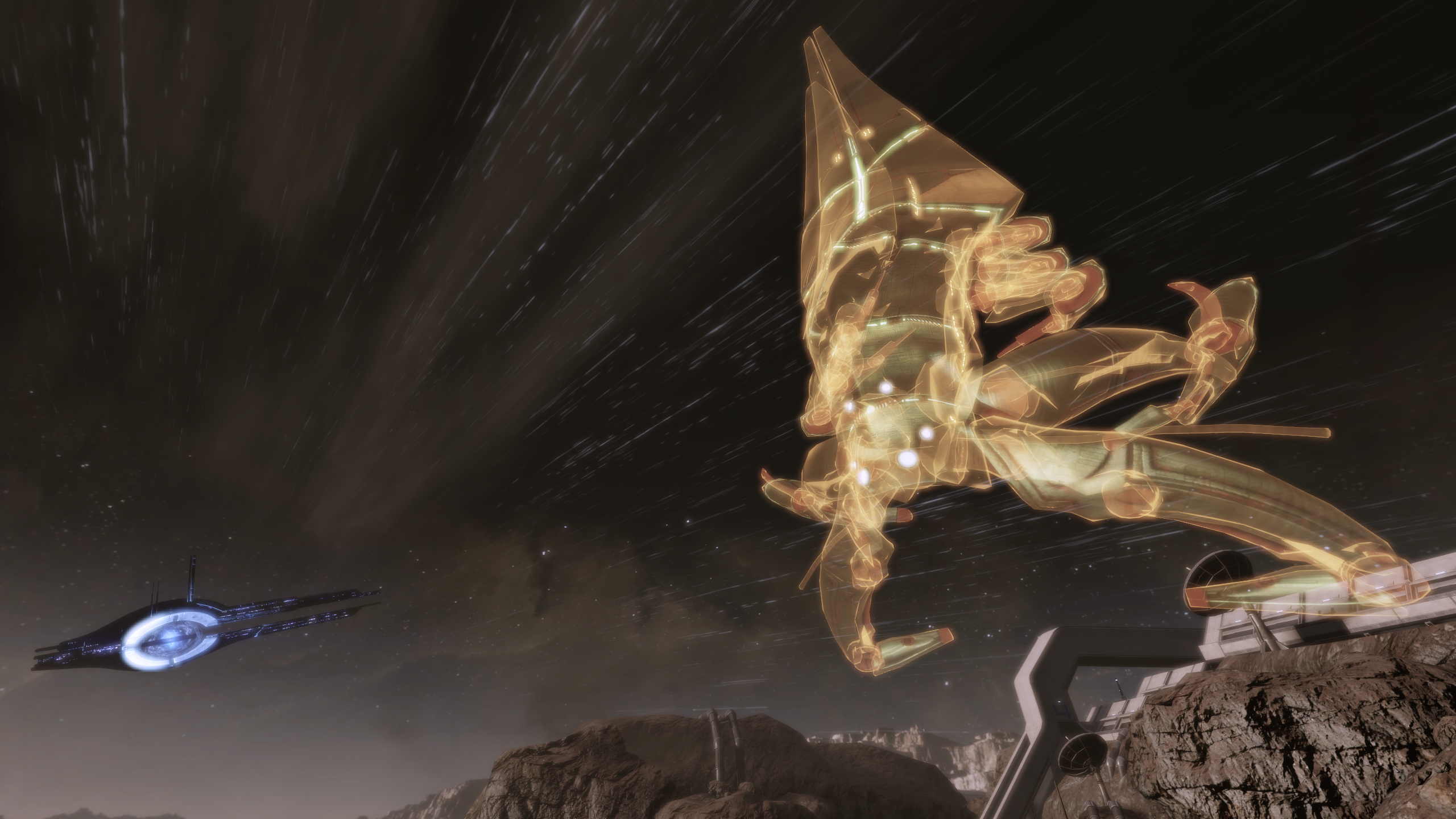 And this ladies and gentlemen is the highlight of this DLC: You get to talk to Harbinger…..well sort of. If you do this DLC before the suicide mission it’s just the Collector general possessed by Harbinger, but do it after and you talk directly to Harbinger. Harbinger’s voice is epic, no wonder its done by the same actor as the Didact.

For being the biggest threat and pretty much the leader of the Reapers, we never get to see it much so it doesn’t have much development in the trilogy. It may be a machine but it’s still technically a character. I only wish that the conversation in this DLC was longer but then again of course it’s short because the asteroid’s about to collide with the mass relay!

When you meet with Hackett about what happened in the aftermath, it’s no wonder I realized that ME3 begins with Shepard grounded. The Alliance obviously didn’t take too kindly to all the batarians that died from the massive explosion. It’s not the system where the batarian home world lies, but I guess it’s safe to say it’s was mainly a batarian colonized system. The last thing humanity wants is war with the batarians right?

That concludes the DLC rambles for ME2, and up next is ME3. I’m only going to be focusing on the DLCs in that game that affect the story as I’m in this fandom because of the lore. Don’t get me wrong the multiplayer DLCs are great too but the lore comes first for me.

As always pyjaks and primitives, look forward to it!

5 thoughts on “Prepare Yourselves for the Arrival”