At 2am last night there was a power outage and I woke up to pitch black feeling like I had become blind. I felt like it took me a moment to realize all that rain we have received in the past few weeks can sometimes turn off the power! Then the power came back and soon I drifted off into a dream.

I was walking down a dark passage that was suddenly illuminated by a golden pyramid, or was it a fort?

It also appeared to be holding up the rock ceiling above and I realized I was underground. If I have to be underground in a dream, I would prefer to be in the Underworld in Perim, or the Hollow on Sera. This time, it looks like I was in Perim because the guards patrolling outside; I remembered from the Chaotic series: they were donned in bright red armor and one of them had chipped horns. 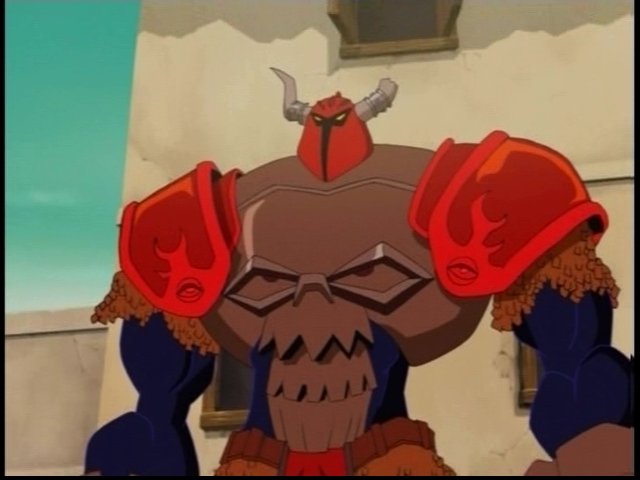 I recognized him as Atrapol, and the funny thing is that in the TV series, he is actually the commander of Lord Van Bloot’s army. He was pacing around in rage muttering “How many more does Chaor want us to capture?!?” that’s when I realized that in this dream Atrapol decided to serve Chaor instead.
I did not know what he meant by taking hostages, but I stayed out of sight just in case by sneaking around the golden statues lined up towards the pyramid. Whatever they had in there was interesting  me, despite the dangers; or perhaps if Chaor was there, I wanted to see him. He is, after all, one of my fictional crushes.
But, the other guards patrolling around with Atrapol were sharp-eyed as I stepped on something crunchy while peering out from behind a statue. Atrapol grunted and looked in my direction. “Seize her,” he said in a rather calm tone. Before I could come up with a method of escape, I was already surrounded and the guards immediately tied me up. Right at that moment things faded to black.
I opened my eyes and was sitting inside a large golden boxed-in room with a single door that had a barred window. The room was quite large for a prison cell, and at that moment I heard voices from the other cells. Some were muffled grunts, and others were whispers.The best I could decipher was: “He’s coming.” and then a loud deep voice boomed from down the corridor. I could not make out what was said, but I knew it was Chaor. No voice was deeper than his in the Underworld.
One by one, the cell doors were kicked open, and there were screams heard. As he got closer to the cell I was in, I began to see flashes of red from the window. “This one is not worthy!” I heard him thunder, and then another flash came followed by a scream. I gasped and realized this dream was a flashback:
When I first came to like Chaor in the Chaotic series, I thought his hot temper was meant for him to be more of an enemy to me should I fantasize about him. I wrote a story in my sophomore year about being transported to Perim, and Chaor forced and alliance, but I ran away to the Overworld because I was scared of his temper and control over me. He deemed me a traitor and tried to kill me personally. It’s probably more badly written than my old Lordi fanfiction!
Anyway, I retreated to the far corner from the door of my cell as I heard his loud footsteps draw near. Then, seconds later, it stopped and I could see the shadow of feet under the door. For a moment, it was quiet, and then suddenly the door burst open and there he stood.

He smirked and looked at me saying, “Let’s see what you’re made of, you look like someone who is willing to cooperate.” He started walking towards me, and I curled up never taking my eyes off of him. There was no sign of a fireball forming in his hands or any source of red glow that could come from a Mugic he could cast. He stood over me like the victor ready to finish off his opponent in the Underworld Coliseum. The flash of red suddenly came and there was no telling where it was generated. But then, an unknown force repelled it away causing him to step back. He growled in frustration and his eyes widened, “You are worthy.” he said and bent over offering his hand. The moment I took it reluctantly, I shut my eyes and woke up.

I really wish I could dream about Chaor more often. Back when I was obsessed with collecting the cards and having him in my collection, I kept hoping every night that I would dream about him. I never did, there were only two nights I could remember where he came. Who knows where he was going to take me if this dream continued. I thought would he train me to help invade the Overworld? Did he think I had some sort of power that I had to learn to harness and master? There are many possibilities that I could use to fill in the gaps.
For now, at least I got to see him in my dreams again.
👽Emily