I’m going to write about this DLC first since it’s my favourite. I spent so many hours on this DLC the two times I have gone through it and sometimes I would never return to Skyrim until I felt like everything on Solstheim was done.

There was another before us, known as Miraak, and the thing I’ve come to learn about Skyrim since I started playing Dragon Age: Inquisition, is that this game was never meant to be lore-deep. We find ourselves at a position where we add to the lore ourselves if that’s what we care about. Simple: Miraak is brainwashing the people of Solstheim while trapped in Apocrypha, hoping to have his temple built, and gather enough power, influence, and dragon souls to return to Solstheim. We have to stop him, yay.
It makes you wonder how on Earth Miraak came to be one of my fictional crushes eh?
The greatest thing about this DLC is that it gives us a whole new area to explore; more quests and places to just fudge around whatever you want to do. Remember, the possibilities are endless in Skyrim! I’ll admit though, I’ve always been someone who likes to run around but I like to do quests; that at least lets me know there is some lore that exists. 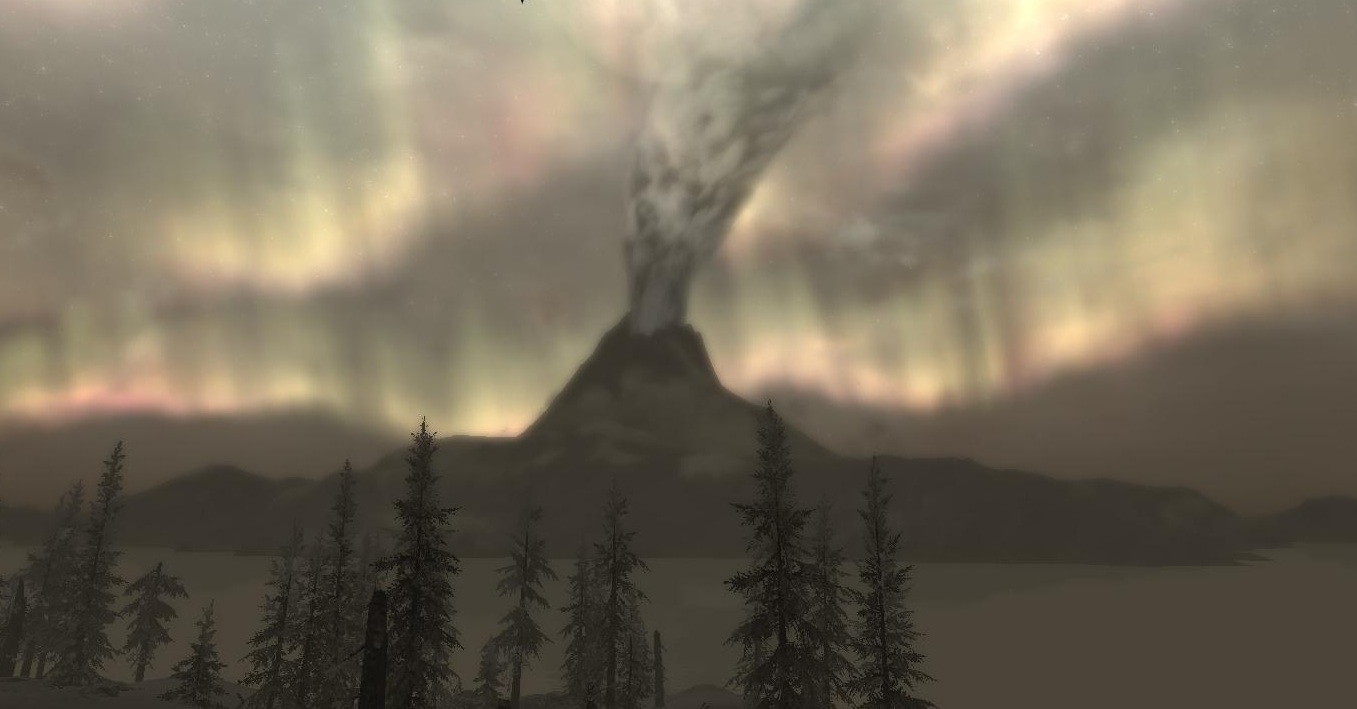 Solstheim is like a mini-Skyrim, except with one ashy area from the still-active Red Mountain, mainly populated by dark elves from being close to Morrowind, and the only major settlement is Raven Rock. Whenever I was here, I would always explore, do side and main quests at the time. But recently, the last time I was here, I decided to do the main quest first, and then run around doing some other shit. The only interesting side quests I really got from Solstheim would have to be The Final Descent and the Chief of Thirsk Hall where we are introduced to a new species called the Riekling.
As great as it seems, it’s still the main questline that serves as the fuel of fire for this DLC.
We begin when cultists try to kill us and we travel to Solstheim to track down Miraak, leading us all the way to his temple where a Black Book is kept. There, we find out Miraak’s plan when we meet him, and I’ll never forget that encounter.

After our encounter, it’s pretty much just running around the island to destroy the stones to weaken his influence, then swimming inside dwarven ruins to find another Black Book. I have spoken why I can’t understand people disliking the Didact, because his rich backstory has been made known on places beyond the games, but people are just too lazy to do their research. But, for Miraak, it’s understandable. He doesn’t have much development for a villain in the DLC and while he does have some backstory which you can look up on fan-made wikis, it’s still not much. But, the biggest issue fans have with him, is he will frequently steal dragon souls from you. It doesn’t stop until you defeat him.

That is why, when I started my battlemage, I decided to set aside three souls to save for the three words of the Bend Will shout once I was ready to do the DLC. That way, I wouldn’t have to waste any time running around in both regions trying to unlock the last word like last time!
But, regardless of what fans say, I like Miraak because I was able to find interest in his short backstory: once a dragon priest who betrayed his masters, became power hungry, and sank into the forbidden knowledge Hermaeus Mora offered him. Pledging his loyalty to the daedric lord, he was imprisoned in Apocrypha when he was almost killed by one of his enemies. But Miraak hopes to betray the daedric lord soon. The missing pieces are: what sort of power and forbidden knowledge is Miraak hoping to gain? Right now, it seems that he only wants to learn more shouts from dragons that are more powerful than ever, but sometimes I wonder what else he seeks that we do not know.
You could say I love Miraak because he’s a villain I can clearly imagine that could have been so much more, hell, he could still have good in him somewhere if he’s willing to recognize his arrogance! 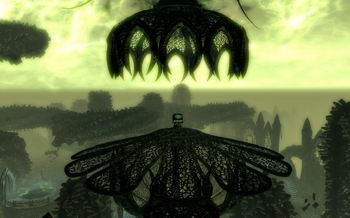 There’s not really much I can talk about other than Apocrypha itself. As I’ve said in a previous random entry here, it’s a weird place that’ll change the way you view books. You could get lost in here, it’s like a drug: engrossing yourself in forbidden knowledge. If you’re a book hoarder in this game, then I’m sure you’ll take every opportunity to find something rare. But then again, I don’t know why anyone would want to collect books in this game; there’s not much to them. However, I suppose they could serve as a codex thing like the BioWare games have.
In my latest play through, I managed to find all seven Black Books, even though the achievement only goes towards finding three of them I think, but still. It’s fun to read them and go to Apocrypha. Once I defeated Miraak, I donned his whole outfit, took his weapons, and put the mask on whenever I returned to Mora’s realm once I found another Black Book. My character basically became the new Miraak! (his robes are pretty badass by the way, I so would do a cosplay of him if I could)
Fighting Miraak at the very summit of this realm serves as the perfect background, but what I seemed to enjoy more than that, was the platform I stood on to speak to Hemaeus Mora, it’s so eerie with all his eyes and tentacles. 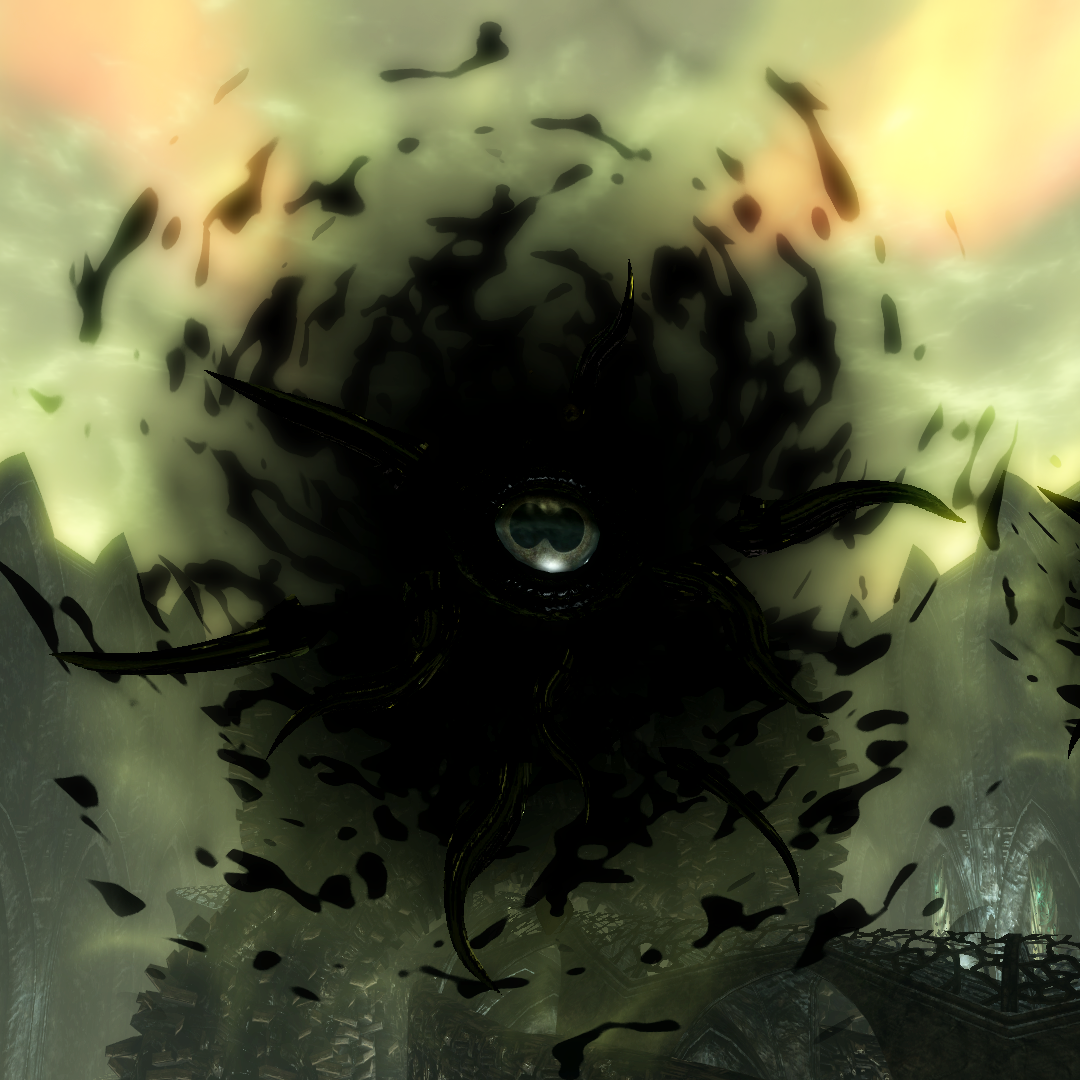 He has such a deep voice, but he talks so slow. Also, I think he’s the only daedric lord that doesn’t have a shrine/statue or physical form like the rest. But, he’s still interesting. You have to be a pretty mean bastard if you desire to collect all daedric artifacts!
Anyway, I think I’ve rambled enough, I’m going to get back into my writing, as it is one thing that keeps my mind off of what’s happening now. Signing off.
👽Emily