I didn’t want to share this dream at first since I recall how far things went towards the end of it. Sometimes these dreams get to parts that are a little too revealing to share. But even if I don’t share a specific part, it still remains in my memory after I write about it.

I have had some pretty good dreams lately, but have been distracted to write about them, until last night.

This one is in a weird setting, involving locations from the nearby mall, my high school, and the cabins at the summer camp I used to go to.

I was sharing a cabin with some girls and a few of them looked similar to ones I have met at camp years ago. We were gossiping and they would also tease me about one of the guys I was close with at school who I would always bump into at the mall.

One of the girls warned me of him possibly being a womanizer. But I refused to believe it.

I stepped outside our cabin and found myself inside the local mall that I always go to IRL to browse Conspiracy Comics and Sephora. Before I go any further, the truth is that this “school” was an interspecies one! So imagine all the species I love: Turians, Angara, Qunari, Sangheili, etc. going to school with me. I think in this dream, it’s safe to say I was a teenager again.

The group of boys in the mall were a bunch of goons from how I saw them, and among them was the one I had the hots for in this dream, 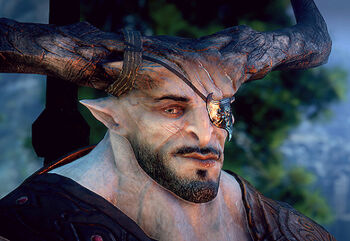 It was the Iron Bull, and instead of his Chargers for company, he had a bunch of alien friends from Mass Effect and Halo. Whenever he saw me, he was like “Hey Kadan, how ya doin’?” We weren’t even a couple yet but he was calling me that anyway. I suppose Kadan can mean a close friend besides a loved one!

Unfortunately, Bull’s friends did not like me. They got irritated every time I came to see him and I wasn’t sure why. Maybe they thought Bull deserved better or wasn’t interested.

Then, I was walking down the hall which was one of the areas in this dream that represented the mall and Bull’s friends, without him present confronted and surrounded me. They told me to stay away from their leader [Bull] or else there would be trouble. Then they proceeded to tear me down by saying he didn’t want me and called me a bunch of names.

I retreated to my cabin and hid under the covers crying for hours. Eventually my roommates came back to comfort me. I cried my eyes out saying I could never have him because he hung around jerks and would only listen to them.

I remember one of the girls saying: “Fuck that, you’re in love! It’s time you tell him how you feel and who cares what they think?”

Then after a few more encouraging words, I vowed to tell him how I felt no matter what his friends thought. I approached Bull and his companions sitting on a bench in the central part of the mall. One of his friends got in the way and was about to threaten me when Bull pushed him aside telling him to let me speak.

I looked him right in his single eye and confessed my feelings straight up but worried inside what he would think. But he smiled and said “Ah Kadan, I knew you always wanted to ride me!” then he lifted me off the ground and kissed me in front of his friends who were looking disgusted and walked off carrying me and ditching them. There’s more that comes after but that is classified!

Moral: Don’t cave into peer pressure! Well, maybe that’s what the moral, but it’s funny because most of the time when a guy hangs out with a girl a lot, his friends might pressure him to date her, not push her away.

Like I said, I’ve dreamt about Bull before, but most of those dreams were a little too personal to share.

Nothing like a romantic dream with different places from my past combined into one! It’s too bad he’s not in DAO, but there’s Sten who’s a badass but not on the market. He doesn’t have horns!