This has got to be one of the weirdest dreams I’ve had since that one years ago where I was on that elevator that went on a crazy loop through all these dimensions.

This one not only features myself as Dragon Master, but this one also involves a subtle trip down memory lane, yes please tolerate this one talking like a hanar.

It began with me flying towards an air field and landing to meet several people who had unique powers like they were all mutants from X-Men. The leader said we were to venture inside Colossus and disable the robot camera deep within that killed on sight.

Upon looking at this “Colossus” I was expecting a geth but instead it looked like one of those inflatable structure you can crawl around in. I squeezed my way in and had my wrist blades ignited. Also, why is it that every time I breathe fire in my dreams, it doesn’t shoot the great distance of most grown dragons like it should? Oh, because I’m smaller.

This is where the nostalgia comes in. 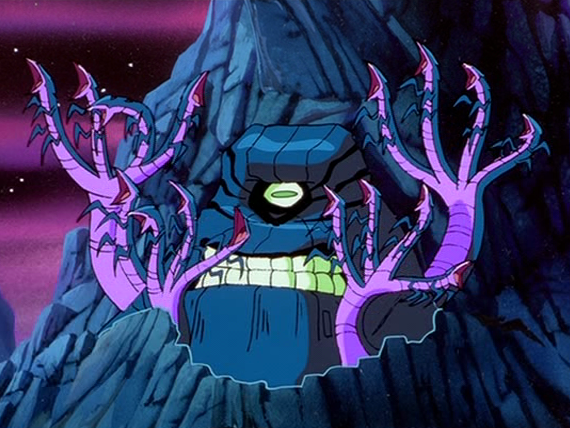 So, anybody remember when Buzz Lightyear got his own movie and animated series? He and his partner Warp faced down one of these monsters while looking for the missing little green men. It was mainly the viper tentacles that scared me as a kid which Buzz dubs as “crater vipers”.

I stuck close to my comrades as we were supposed to work together to find our target and then the viper tentacles began to pop out of holes in the walls, ceilings and floors lunging and releasing gas. I was tempted to fight them but had flashbacks from my childhood when I was at first too scared to watch the scene with them in the movie. I ran and managed to blast fire at a few at them before I slid down the stairs into a tunnel leading to the lower level. This area was less colourful and a single search light moved throughout the open area.

Someone grabbed me aside and told me to stay inside his shield as it was allowing himself and anyone within to be invisible to what he said was the camera thingy. I stayed close to him with wings folded and he took a part of his shield to keep it around me and said he would be right back. I curled in the yellow corner and felt like the search light was on me the whole time. I tried not to look at it, but as soon as I heard a loud bang and the camera was destroyed, I made a run for it.

You know what I absolutely hate? Dreams where I cannot run, like some invisible force is weighing me down where I can’t even move my legs at all. By the time I came back outside I was suddenly going at warp speed and stopped right in my neighborhood and struggled to make my way back home.

I overheard my dad talking as if I was still on my vacation last month as I reached the door until I transformed again and attached to my back was a jet pack enabling to fly faster along with the wings. I decided to test it out and suddenly I was flying faster than ever. I could hear Larger Than Life by the Backstreet Boys playing in the background as I blasted across the lake and in a matter of seconds, I could see the runway from the Punta Cana airport; like I wished I was still in the Caribbean now. One of the planes took off swooping over my head as I proceeded to land waving at the passengers who could see me in the window.

Can I please just go back there for another week? Well, that concludes last night’s dream, I seriously need to write more of these instead of resorting to Mass Effect everyday.

If you remember that crater viper monster, you deserve a pat on the back.