If you walked into my bedroom and glanced at my dresser by the window, it’s safe to say that you will think of me as a perfume addict.

I love spraying some on to add a sense of completion like I’m ready to greet the day ahead once I am dressed. One day might be floral while another day might be fresh. At nighttime I like to spray on something a little stronger like patchouli to give myself a sense of comfort before I go to sleep. I enjoy visiting the drugstore and trying on different scents when the bottle catches my eye.

Now mind you, if many scents give you a headache, I won’t wear my perfume around you. If the workplace I’m in requires me to be scent-free then I am more than happy to comply.

But enough about that, I’m going to tell you a little about my ever-changing perfume collection and highlight the ones I’d repurchase.

The first perfume I owned was Avril Lavigne’s Black Star. The only time I wore it was at night since I was in school they had rules against scents. I barely remember what it smelled like. To me, everything smelled the same probably because I sprayed it too close and picked up the chemicals before the actual scent itself!

Avril’s second perfume Forbidden Rose followed and I also obtained a gift set that included Taylor Swift’s Wonderstruck. That lasted me about two years. By the time I was halfway through Wonderstruck, I caught site of Katy Perry’s Mad Potion and only from there I came to appreciate perfume more, so it’s the only one from the early years that I would buy again. 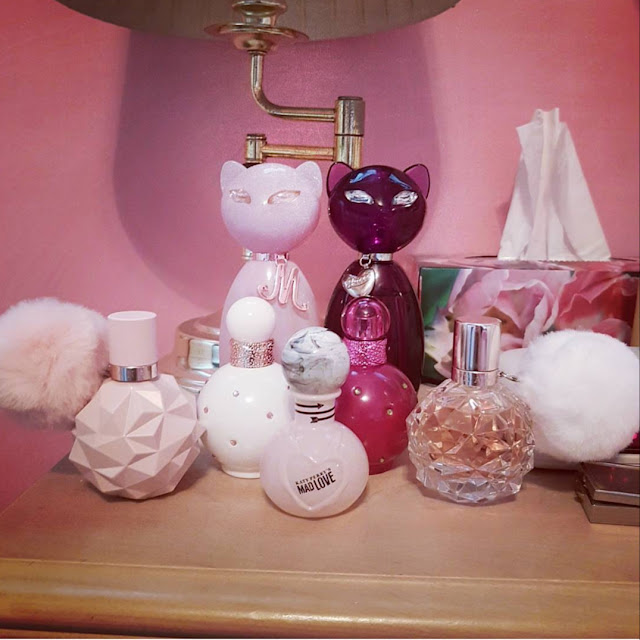 Back row left – right: Meow and Purr
Front row left – right: Sweet Like Candy, Fantasy Intimate Edition, Mad Love, Fantasy, and Ari.
By 2016 I suddenly started hoarding fragrances. It was always the pretty bottle that made me cave in. Sometimes I tried it first or winged it. So, in the picture above is what my perfume corner looked like by late 2016. Ari was the next to come and I loved how she put a pompom on every bottle but I didn’t love the scent as much as Sweet Like Candy which I waited all summer that year for. I also liked how each of them had a marshmallow scent in them.

Mad Love, Purr, and Meow were ones where I just winged it but they never beat the original Mad. Purr was quite strong so I only wore it at night while Meow was sweeter.

I think I came across Britney’s original Fantasy (The little hot pink bottle between Mad Love and Ari) many times before as she has tons of fragrances with that name and they all have their own colour like blue for the midnight one and so on. But the one I had was the original and I absolutely loved it. It was sweet, fruity, floral, and even had a note of white chocolate in it too!

Then there was the intimate edition from the Fantasy collection which I thought I’d enjoy as much as the original: while it was fruity it was also weaker I guess that one flopped for me.

So after going through all those bottles pictured above, I have to say that the only ones that I would definitely repurchase is the original Fantasy and Sweet Like Candy. I was so in love with it and miss it greatly today. I remember I first caught sight of it at Winners and then a week later I biked back there to buy it. Now, I can’t find it in my local Shoppers Drug Mart or anywhere, but Amazon has it so it’s time to pull out my wallet!

Sweet Like Candy on the other hand I followed every social media post until it was released. 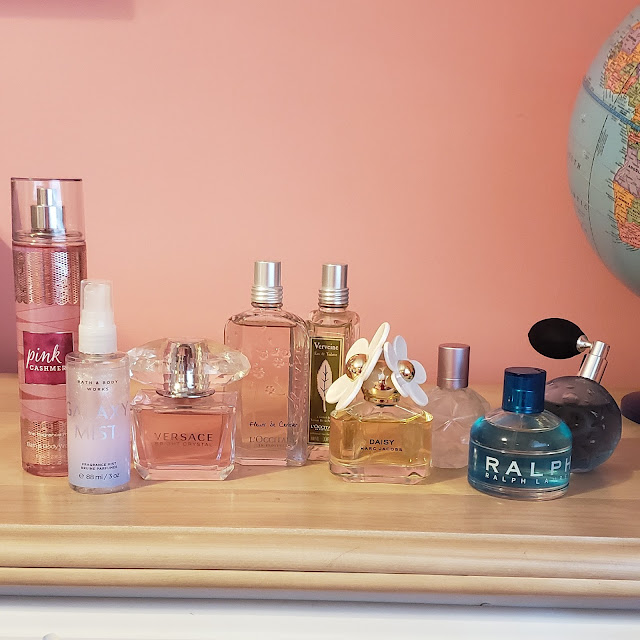 These fragrances were gathered over the course of time when I started using up the teeny bopper ones in the other picture. I decided it was time for a more sophisticated approach and weaker scents out of respect for my mom so she wouldn’t get headaches all the time. These were also a lot more expensive. The Mugler perfume with the old-fashioned spray method was a Christmas present that I first saw presented on the Dave Lackie show, it’s a strong scent so I only wear it at bedtime and I can’t count how many times I’ve had pleasant dreams after putting it on. Its name translates to “Star of Dreams”.

Ralph was also another gift and it has a very fresh scent but there isn’t a lot that’s special about it. Moonlight was a Black Friday deal I scored last year, it’s got the same marshmallow note but it still doesn’t top Sweet Like Candy. I think I’ll run out of it first. Daisy, interesting enough, is a fragrance I came to love when I bought Alien from Sephora and received a sample bag with my order containing Daisy as one of the samples. I bought a full bottle after finishing that sample. It’s not very strong so I have to re-apply it if I want it to last all day, but it’s really fruity and floral so that’s enough for me not to complain about its lack of longevity.

Cherry Blossom and Verbena were both bought at the local L’Occitane, and while the cherry blossom scent is nice and subtle, I’m actually loving the verbena one a lot more. Sometimes I forget how much I love citrus scents. It’s great for summer and keeps the mosquitoes away!

Bright Crystal is currently my number one, it’s very fresh but also has a hint of floral and its subtle enough to bring out the balance of something I can smell, but also tolerable to those who are around me the most. I went through three sample sizes of it before finally receiving a full bottle for Christmas last year. It’s perfect for everyday wear at any time of the year.

The Galaxy Mist is from Bath and Body Works and I got it with several other products for my birthday this year from my aunt and uncle. Despite how glittery it is, it surprisingly has a fruity scent. I can imagine if I see Lordi again, I’ll want to wear a black dress and spray this glitter stuff on my chest just below where my locket hangs. However, it was a limited edition item so once it’s gone, it’s gone. Wait, maybe if I really love it that much I might be able to try Amazon.

So, which ones would I repurchase from what’s in my collection today? Definitely Bright Crystal and Daisy they are my top two. The Mugler one as well, I thought it was also limited edition but it’s still available in some places so why not? Maybe the cashmere one too.

To close this off what else would I add? I’m not going to repurchase Fantasy again until I have more dresser space! I also love the three scents Soap and Glory has in body sprays, and I should probably get Alien back (only this time I’ll stick to wearing it at night.) Maybe I’ll try Mugler’s original Angel too. (also a nighttime only one for me)

So yeah, I’m a perfume addict and have been one for years. But, like I said, I may love my perfume but if you get headaches easily or the environment is supposed to be scent-free, I’m willing to make that sacrifice.

Any other perfume addicts out there?