I must write, whatever I feel like writing and as often as I can while I still can, cause one of these days I’ll be so busy I’ll wish I had the freedom to write this often again.

I feel like letting out a story from my imagination. This isn’t a dream, but something I put together along with my friend into a short story. It came to me after I watched The Greatest Showman a few months ago. It is the story about how I in my Dragon Master fantasy, came to Palaven for the first time to negotiate an alliance with the turians. Naga’s threat was expanding beyond Earth and I needed allies with strong military to help me defend the galaxy from him.

When my ship entered Palaven’s atmosphere, I couldn’t help but spread my wings and jump out soaring into the city. (I actually don’t know what Palaven looks like on the surface, so for now, I’ll make something up on what I do know.) Many turians who were walking on the boardwalk and I swooped over their heads, startling them. At that moment they all looked up as I looped above them and flew back to the landing pad just as the ship settled.

Two turian soldiers and a diplomat were approaching as I touched the ground and spun back to normal. I greeted them with the universal greeting and told them that I was told to come as an ambassador to humanity to start the talks of an alliance. They sent me to an office at the top level of tower near one of the military bases.

When I got inside, there sat Primarch Victus saying he was expecting me. I looked around the room to see a framed set of service medals. He beckoned me to have a seat on the couch next to his desk.

He got up and sat next to me and when I introduced myself, he asked me why the turian military was needed to aide against a threat that was not after them yet. I proceeded to tell him the entire story of Naga’s growing threat and that soon, the more allies he gathered, the more other races would be targeted until there would be a galactic war. Throughout it, Adrien just listened with curiosity and tried to imagine the whole possibility. He said he was willing to provide any help he could give, however, he would have to get the other members of the turian hierarchy to agree with him.

We took the cab to the tower just like the Citadel and Adrien activated a holographic comm panel (most likely restricted to members of the turian hierarchy only), and several holograms of the other Primarchs in turian-colonized planets appeared. Adrien and I proceeded to explain the situation to them and most of the Primarchs seemed truly concerned about the growing threat. Only one of them however, questioned that we were making it all up since there was no proof we had to present of Naga being existent.

Adrien decided that we needed to vote on the matter. The results were only the Primarch of Aephus voted against the alliance…. at least until after Naga showed himself. We were then dismissed from the meeting and Adrien said that I could stay at his place.

His apartment was in the Southern part of Palaven’s capital city overlooking the gardens and lake. The first thing I saw upon entering the place was a photo of his family where he was alongside of his son Tarquin who was now grown up, and his wife who had died a few years back. I gave him condolences which he appreciated but also said he had more pressing concerns and could not worry about the deceased. I went into the guest room to unpack my luggage while singing to myself (Adrien was listening unbeknownst to me) and I went for a stroll in the gardens while he prepared dinner for us. Thankfully, he had human food to make as whatever turians eat, doesn’t go well with the human digestive system!

We began bonding closer over dinner and he seemed touched by how bright and cheerful I was along with my curiosity for his people. That night however, things got worse. 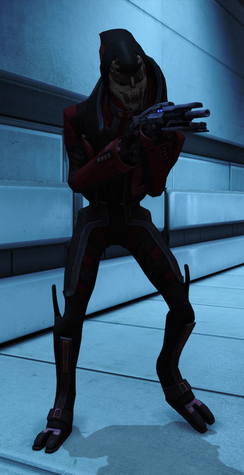 Carnifex pistol firing at a turian atop of the bed who was also armed with a gun and knife. Who ever he was, he was sent to kill me. The bullet missed and hit one of the pillows, then Adrien tackled him to the floor in hand to hand combat. As Adrien pinned the assassin to the ground punching him aggressively, the assassin suddenly kicked him in the gut, sprung up and tried to flee. I grabbed the Carnifex which had been discarded on the mattress upon when Adrien tackled the assassin and shot him in the leg. He crumpled to the ground and tried to crawl away but Adrien and I caught up to him, pointed our guns demanding that he start talking otherwise we would kill him.

The assassin complained about the pain in his leg and laughed saying he refused to say anything behind his motives until I pointed the Carnifex at his head. He panicked and said the Primarch of Aephus put him up to it. Adrien called security to take the assassin away, and then he decided I should sleep in his room instead while he unfolded a cot beside the bed. I was touched by his protection.

The following morning, we confronted Aephus’s Primarch who arrived in person for the next meeting. Adrien pinned him to the wall demanding why he sent an assassin to kill me and he refused to talk until Adrien started to choke him and then he said “Some dragon creature offered me a huge bonus if I did it!” When Adrien set him down in shock, I took his arm gently to stop him from killing the other Primarch. He instead ordered him to leave. Knowing Adrien, he was always a military man and liked to be physical. The moment I touched at him, he looked at me feeling sorrow and stormed out of the room.

I ran after him as he went down the steps and onto one of Palaven’s beaches where he stood at the shoreline and confessed to me that he was never meant to be Primarch and that he would always be a military General better. I tried to comfort him and say that he was a unique leader and owed him for saving my life the previous night. He looked at me and said that I touched him inside when we first met and he was beginning to fall in love with me. At first I wanted to dismiss his feelings as only an act to secure an alliance between our people but he said they were genuine and also told me to start calling him by his first name (I had been calling him by his last name or as simple “Primarch” since we met). As he leaned in to kiss me, several ships from Earth swooped over our heads. The leaders from Earth had arrived to meet with the turians.

I transformed and took Adrien my arms to fly him towards the landing pad to meet with them. I’m not going to disclose who the Earth leaders are in this fantasy, neither military nor political, last thing I want is complaints from visitors that I chose the “wrong” ones, and don’t even try to say you-know-who is in this, because those comments will be deleted.

Anyway, we met with the leaders and proceeded to the meeting, but I found myself falling asleep in my chair so I rested my head on Adrien’s shoulder until it was over. Afterward, he and I went to dinner at the karaoke bar that served food for humans as well. The place would randomly call up singles and pairs to sing at any time. Just as Adrien and I were having our desserts, the spotlight shone on us beckoning to come to the stage. I took Adrien by the arm and pulled him up onto the stage with me. Together we sang the duet of Rewrite the Stars, hence why I think of this whenever I listen to the song myself.

Everyone applauded and Adrien said I sang beautifully while holding my hand. As we walked back to his apartment, we took a detour through a park. Once there, I told him my feelings were mutual and then too overjoyed to speak he clasped his arms around me, sweeping me off my feet in the process and we kissed.

And that’s where it ends really, if it were to go further, I imagine Naga would launch a full-scale assault on Palaven and perhaps the relationship would lead to…..you know…..tying the knot? 😉

Well that’s it for this little story I imagined in the summer, it was good to write this. Perhaps I should do it more often, I don’t care if anyone thinks I’m delusional. I have to keep writing to keep myself busy in times like these. I’m happy to have Garrus in my heart and another turian too!