If you’ve known me since tenth grade, you’re certainly aware that that was the year I was obsessed with Chaotic: the Danish trading card game that eventually became a huge success here in North America with a TV show on Teletoon and it became the first trading card game to have an online platform where you could play and trade online. Each card had a code you would enter on the website to upload cards. Though I never did this myself, I was still a big fan as I watched the whole animated series and collected the cards which I keep in a binder.

I wondered for years why the franchise suddenly came to a halt: the cards were no longer in production and the third season was never finished. After immense research, I learned that 4Kids Entertainment that made a deal with the original creator wanted to obtain full rights. A lawsuit was filed, 4Kids lost and Chaotic was officially discontinued. At least, well that’s what I remember hearing from this video:

Now, the only mementos I have left of the franchise is my card collection, access to episodes on YouTube (and I might consider looking for DVDs), and a little action figure of my favourite creature from the game: Chaor.

So, to this day I still wish the franchise would come back. If it did, I could start playing the game and the series could continue with the lore expanding. What I loved about Chaotic the most was the lore. There’s a lot to what’s in Perim but there are many unanswered questions and improvements that I think could make it even better. So, down below are the following things I would like added to the Chaotic universe, and this mainly applies to the TV series since that was the part of the franchise I spent my time at.

1. A diverse cast of players and creatures. 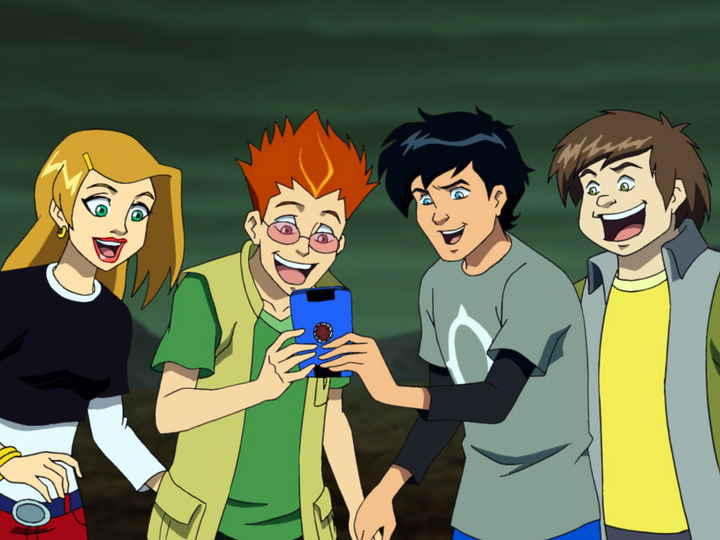 If there is one thing that Chaotic’s TV show lacks, it’s diversity in terms of creatures and players. Above are the four main players: Tom, Kaz, Peyton, and Sarah. Each of them plays as one of the four tribes in Perim, but the series centers more closely on Tom and Kaz. So where is the diversity lacking? Well, think about it, from someone who has watched the entire series, we see mainly Tom and Kaz battle against other players or each other. Sometimes Peyton would also join in, but Sarah almost never battled unless it was with the boys in a few episodes. If she had a match with someone, it was only mentioned in an episode, or an unexpected turn of events in Perim would force her to miss out on it.
Whenever one of the three guys had a match of their own, their opponents were always male, except for those two times for Peyton in season 1. So, the main issue is there are not enough female Chaotic players in the spotlight. We see lots of girls in the background, but most of them just sit around with the guys and they don’t battle. It’s only in a small amount of episodes do we see one of the main characters have a female opponent. Krystella is another main female player but she only battles three times in the entire series.
That’s why I’ve always enjoyed the episodes about adventures in Perim more.
And it’s not just gender, it’s races too. Most of the Chaotic players I saw in the show were white. Occasionally, I saw Tom battle a black male player but that was all.
In Perim, the lacking of diversity is just as noticeable, but there aren’t many female creatures there…..  well except ones that have a major role. Takinom and Intress are the only ones that have a big role to play, especially during the war against the M’arrillians.
I get it, when this franchise was first marketed, it appealed to boys most. But, when you’re a girl who likes something that isn’t “girlie” don’t you wish there were more girls into it, or that girls in that particular series that contributed a lot? It makes you feel that you’re not alone. I don’t know a lot of girls who liked Chaotic like me, but they’re out there somewhere. That’s why I often fantasize about being in the show myself where my screen name would be ChaorCutie, I would battle in the dromes a lot and spend a lot of time in the Underworld part of Perim where I’d eventually gain Chaor’s friendship, do errands for him, and in exchange he would give me first access to new rare scans! So yeah, diversity would be a must to improve Chaotic.

2. A layout of Perim

Perim is the name of the world all the Chaotic creatures live in. But do we have any idea what it looks like? We know it is divided into the Overworld (surface) and the Underworld (underground) for the tribes that go with those parts. The Mipedians get their own desert in the Overworld, the Danians have their quarters somewhere in the Underworld, and the M’arrillians are behind the Doors of the Deepmines.

There are so many locations in Perim to battle in matches and explore, but we never find out what it looks like all meshed together, you know, like on a map. Think about it logically, where does the Mipedim desert end and begin? What does the Underworld look like, like where each of the pillars and the distance between its capital city and Gothos Tower?

Call me a geographic nerd, but I like looking at maps and I want to see what Perim looks like, where everything is. Perim must be an awfully huge place given the number of locations there are in the game, so why didn’t we get to see it? 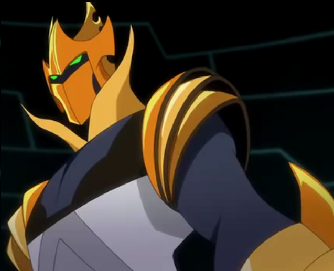 We don’t know much about the Codemasters in Chaotic, other than that they are considered the designated leaders of each Battledrome: get seven victories in a drome and you can challenge the Codemaster or vice versa. Just like the Battle Tower in the Pokemon games! Apparently, they are also in charge of setting rules and resolving player conflicts that go not just in their drome but in Perim too. So, it appears they have a connection to what goes on in Perim.

We get exposure to at least three of them in detail: Crellan who taught Tom the importance of attitude over cards, Imthor (pictured above) who was involved in the investigation of those players who were destroying rare locations in Perim, and Hotekk who was a very stern opponent against Tom in season 3.

Kaz, Peyton, and Sarah briefly mentioned the Codemasters they fought and apparently one of them is female; namely Amzen according to the wiki, so I would definitely have that explored more if possible. Their names are on the wiki: Amzen, Oron, Tirasis, and Chirrul; so, I would like to know what do they look like? What rare creatures and other stuff do they possess? According to the wiki, most of the other Codemasters were supposed to debut in season 4 if the series wasn’t halted at that time. Also, why do the Codemasters dress like robots and knights? Is it a symbol of being a dictator, or are they actually not human? No wait, they gotta be human because there was an episode where Crellan assumed a human form to attract Tom and help him before revealing his real identity.

We don’t know much about how the tribes of Perim came to hate each other as there is very little lore about it until halfway through season 2.

From what we know, the Cothica is something all tribes are fighting for. No one knows what it does, or is, but maybe some of them believe that obtaining it gives them total control over Perim. Funny, if you unscramble the letters you turn Cothica into Chaotic!

In season 2 Phelphor was rescued and revealed to Chaor his encounter with the M’arrillians and that they had possession of the Cothica behind the Doors of the Deepmines. He then reveals he is one of the M’arrillians and wants to free them by opening the doors. Upon his treachery, Chaor tries to stop Phelphor and is the first to witness the opening of the doors. But there was no Cothica, instead there was the M’arrillian invasion where they brainwashed other tribes to serve them and desired to flood Perim to be their home. So, it seems like there is very little to explain of the conflict before and how it started so I’d like to know a little more about that. I never really had much interest in the M’arrillians until towards the end of the war against them.

I would probably make the Cothica be something: it could be a powerful Mugic or something, anything that allows the bearer and their tribe to rule all of Perim in a sort of way. I don’t know, it’s hard to come up with something due to how vague the whole concept is, other than it being Chaotic scrambled. 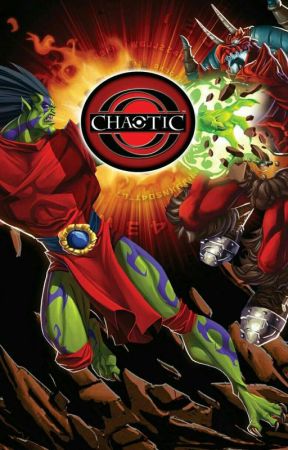 The third season was supposed to reveal this right? It’s obvious that Maxxor and Chaor, being the most iconic characters/creatures in the TV series and card game, is there a reason why they came to loathe each other so? I guess it’s common sense for the Overworld and Underworld to hate one another but it shouldn’t be without reason right?

When Tom and his friends gained access to that portal post-Hotekk match, they met Kiru who is ancestor of Chaor. Kiru was leader of the village named after him and eventually went on to find the Underworld city. It seems to be that Kiru was almost neutral on both tribes, but after a turn of events involving Maxxor’s ancestor Vlar who went from thief to hero, Kiru eventually went on to become full-on Underworlder in that city becoming an enemy of Najarin. Since the season never finish, how that came to be is a mystery.

So, does Maxxor and Chaor’s rivalry come from their ancestors? We don’t know, and we may never get our answers now that everything is discontinued.

What would I add then? Well, obviously it would have to be something to fill in the gap so our questions can be answered. After the events that were added to season 3, I would possibly add something where Vlar goes on to rule the Overworld and Kiru, now ruler of the Underworld betrays Vlar that results in the war between the tribes. It then passes down to the following generations of their families until we are at the present: Maxxor vs. Chaor. You know I’m rooting for Chaor!

And those are the five things that could be improved in the Chaotic universe if it didn’t abruptly come to an end. It could have offered so much more yet these things happen, especially if it’s licensing issues. It has such a vast lore full of unanswered questions that many fans like myself who miss it still want to know this and that and it’s also a series that could use a bit more diversity too. Most of the people who loved it while it was still around, are likely gone by now, or they’ve gone dark because there’s no fuel to keep the fire burning.

I still have my binder full of cards and have traded with my friends a few times, but now, there is no way in hell that I am giving them away. I have countless memories collecting them: those days going to the comic story weekly, every day after school I would watch Chaotic, and watch the back-to-back episodes on Sunday afternoons.

I don’t care if it’s over. In my imagination, I can make it the way I want it to be.