I’m sometimes too worn out to write or do any gaming that I just eat dinner and crash but it is worth it. Well, welcome to work life!

Yes, I know, I still preach use what precious time you have left remaining in the 5 hours you are awake for hobbies, and when I get home at the end of the day, I am too tired to indulge in some of the ones that require a lot of focus like writing and gaming, so I just resort to reading or working on my adult colouring books.

It’s been almost a year since I learned how to bake cakes, my mom taught me during that period of boredom and anxiety that that awful faculty strike brought. Feeling creative, I baked another one last weekend. Oh, and I was originally was going to keep this a secret like Project Dreamshadow from last year but I’ve already been kind of dropping hints about it in previous posts so I might as well say what it is.

I want to build a PC for gaming. 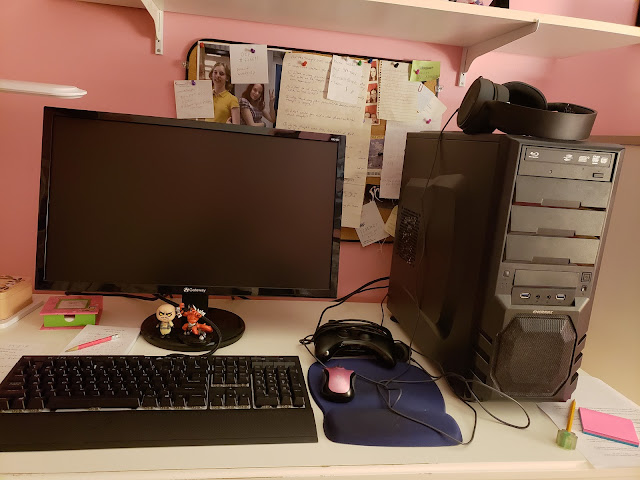 My current PC. I love my baby, we’ve been through a lot together, but there are things I want to play that she can’t run. 😞Right now I’m writing from my desktop that was custom made by my brother in 2014 who passed it down to me along with its monitor after he built something more powerful at that time two years ago. I started to get into PC gaming; and the benefits of it are great. There were games popping up that I wanted to play but my computer wasn’t powerful enough to run them; it was either not all my specs met the minimum requirements, especially my CPU, or it was something like my computer did meet all the requirements but my SSD didn’t have enough free space. I have two drives on my computer; the SSD I use to install and run big games like DA: Inquisition, while all my smaller games would be installed on the HDD.

One time I tried installing Shadow of Mordor that was supposed to run with no issues but the game took up ALL the remaining space on my SSD leaving no room for important things like system updates.

So, due to my expanding taste in games and my enjoyment of PC gaming, I think building a PC more powerful than my current one would be a good idea. Not to mention expensive though, many gamers turn away from building a PC due to the overall cost of the parts required. However, I have learned that despite the fact you might be spending possibly two grand or more depending on the specs you want, it saves you money in the long run. Think about it, when you build your PC, it teaches you responsibility and how computers work and the pieces, so if I had an issue, I could fix it myself instead of taking it to Techville to have them fix it for a fee.

It also allows you to have something completely your own where you get to pick the specs you want to suit your needs whether you’re a gamer, streamer, or just a browser. You could resort to just buying one of those pre-built gaming PC’s; however, what if they don’t have all the specs you want? By building one, you get to choose everything. Don’t know how to assemble it all? Either Google it, or get someone to build it for you, hell a couple of months ago, I felt my computer needed a good cleaning from the dust, so instead of carrying the big thing a few blocks to Techville, I got a screwdriver and a can of air, opened my baby up and dusted it myself.

I’ll be completely honest here. Opening up my computer for the first time to dust it allowed me to get to know it better and I was able to learn what each part was for by making a connection to organelles (ah biology was my favourite subject in school). For example, your CPU is the nucleus which acts like a control centre.

I sort of have an idea what specs I want. I definitely want a bigger SSD, as my current one is 118 GB. Now that does seem like a lot, but if you want to play big games like Inquisition or Shadow of Mordor, then I think you’re going to want more space so you don’t have to worry about running out. The simplist solution is to just uninstall anything you haven’t played in weeks, but still, like I want to play The Witcher (more on that later) and by the time I get to the third game my SSD is too small for it!

My CPU also definitely needs to be upgraded if I want to play some bigger games. Right now I have an i5 which isn’t bad but there are games I want to play that require say, an i7 like Andromeda and the newest Assassin’s Creed games. Lucky for me, my brother says now is a good time to consider as now that Intel has released their i9, the i7 is dropping in price.

Finally, my graphics card also has to be something upgraded. Not that there is anything wrong with my current AMD Radeon R9, but again, it can’t display games that I want to play or play again in good quality so, yeah.

Other than that, a bigger RAM like 16 GB would be nice and some extra fans to keep the thing cool, especially when I’m playing bigger games is essential.

I felt like I already started down the road to this when I bought my new Steelseries Arctis 5 headset and Corsair mechanical keyboard. The Corsair is the most memorable, as I had a day off that summer day, so I took the bus to the big computer store in Burlington. I was browsing for a gaming keyboard that looked cool and had the right switches. My brother had a Razer with those green clicky-sounding switches. I wanted something comfortable for my hands to rest on while typing, but also with quieter switches and then the guy showed me the Corsair that had customized lighting and silent Cherry MX switches. I tested it out and fell in love. Right there I knew that this was the first steps to building a gaming PC.

I think the next step is to get a new monitor. As much as I like my old one and have had it for two years, it won’t be any good to me once the new PC is built. That’s just the way things are.

So yeah, that’s this project I want to initiate. It’ll probably take a while since I don’t have a lot of money and I will have to make some sacrifices if I want this to be real. Maybe that’s why I went from Urban Decay to NYX (though I still love MAC lipstick and L’Occitane skin care!), maybe that’s also why I’ve stopped buying perfume; but then again I have way too much of that. Due to my current budget, I may not be able to buy the parts all at once but instead split up purchases every month to avoid bankruptcy. That means it’ll take longer but I’d rather do that than be broke.

The point is, this is going to take a lot of commitment outside of my professional life. I may not be a tech genius, nor do I need a big supercomputer like what they have at NASA, I just want something to appeal to my video game taste which is starting to expand into big games that my current PC isn’t compatible with.

This definitely will be worth it.