I wonder if this dream is supposed to be related to the Bumblebee film due to be out for the holidays. The only difference is this dream is about Optimus instead, but it goes in a similar direction in terms of story that we’ve seen so far via the trailers with Bee.

I really wish I could have more Transformers dreams and yes, I’ve probably said this in every post when these dreams do happen.

This dream began after another one ended, and in this dream, I was starting a new job at the Peterbuilt truck company (mind you, that’s not my job in real life. I love my real job way more than the ones I have in these dreams, so these dreams you could say, I am under a different identity) and my boss told me to pick out whatever truck I wanted to drive whenever I was on duty. I walked around the lot for a while and all of the trucks looked the same to me until I saw one large red semi in the very corner of the lot that looked like it hadn’t been used in years. There was something about that truck that called to me and I think that’s where the connection to the new Bee film and the 2007 film come into play. My boss said: “The truck chooses the driver Emily, maybe this one has chosen you.” 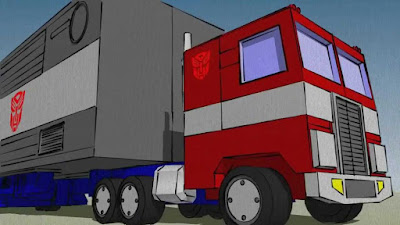 I climbed inside to get a feel for it and put my hands on the wheel and right there I noticed the Autobot symbol, but of course in that dream, I didn’t know what it was. Unlike in the movie, the truck didn’t react with the radio, but then again OP is a lot calmer than Bee! I felt suspicious of the symbol and the screen in the center with a line that was like those ones you see on a heart monitor. My boss told me to show up to work first thing tomorrow and that there was nothing to worry about.

The following morning, I showed up early and ate my breakfast in the kitchenette and overheard snickers in the other room. I peered to see the rest of the staff, they were all men. At first, I tried to brush it off until I realized they were smirking at me and whispering. I was the only female employee and I knew what was coming given their body language. To avoid any potential harassment from rising, I retreated to my truck out in the back, opened the door a little, sat on the step and ate there.

I spoke to myself as if the truck had a mind and was listening and said, “Well, don’t worry, I won’t have to work with them, they all have different routes. It’s just you and me.” Unbeknownst to me, the truck’s eyes were secretly observing. My boss had told me my route didn’t start until the afternoon, so I spent the morning cleaning and polishing the truck making the red paint look newer and shinier. The same symbol showed up on the front and trailer further intensifying my curiosity.

Strange noises started to occur inside the engine as I opened the hood to add some oil and I saw something glowing blue in the tank. That was not oil. I dropped the can and stepped back wanting to go get my boss until I remembered he was in a meeting and my route was due to start in ten minutes. The trailer was already loaded with the goods so I decided to assume the glowing I saw was just a new kind of tech and started up the truck to begin my route.

As I drove down the country road, I tried not to think about the strange things I saw. All was well the first hour as I made my first stop and the workers unloaded the trailer. But by the time I was back on the road something strange happened. The screen with the line suddenly lit up and showed the face of a red and orange robot along with a zigzagging line. A voice then followed.

“Optimus, are you there? I know you said no communications while you keep an eye on the humans but we’ve got an emergency! Decepticons have been spotted at the warehouse East of your location, I think they’ve found our hidden Energon cache.”

I was startled and when there was no answer, I tried talking to the caller and their answer was alarmed.

And I was like “Wait, what? Who is Optimus? Who are you?! What’s going on? I was just driving this truck and…”

Then out of nowhere the truck swerved off the road without me even turning the wheel, and drove into the forest. I let go in shock to see the wheel moving on its own and the entire time I was like, what on Earth is going on?

The truck stopped in a clearing and once the door opened, I quickly got out and stepped back.

“Okay okay, you’re alive aren’t you? How else would you be able to drive without me using the wheel? Who was that contacting you? What’s going on?”

At that very moment, the truck suddenly transformed revealing of course: 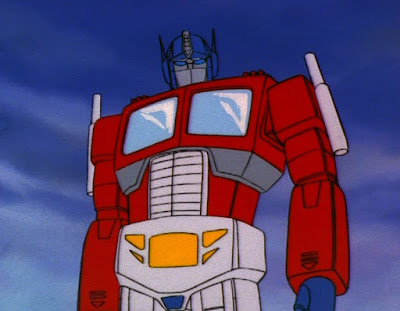 OP introduced himself and explained he had been undercover at the warehouse where all the trucks were because during prehistoric times, the Autobots had found a massive deposit of Energon in that clearing. They had been protecting it from the Decepticons for centuries, even when the truck warehouse was built on top of it. He also said he never intended to have me discover him, but now that I knew, my safety was of utmost importance and now that the Decepticons had discovered the cache, he and the others had to stop them from taking it.

Having no other option, he had to take me along and told me to get back inside the truck and once we arrived at the warehouse, he told me to keep my head down until it was safe and he would come back for me.

By the time we arrived, the warehouse was burning and several trucks had been flipped over. I took cover behind one of them as he turned and went to join his fellow Autobots in battle. It was dark out and the smoke rose up into the sky. The moment Megatron showed up to the scene and pulled out his blaster, I woke up.

I’d say that if there was an Optimus origin story, or any sort of Transformers film that I were to star in, this is one of the ways I’d like it to go down. My character could resemble my real life or she could be completely different. However, there are millions of different ways I can think of how OP’s path crosses with mine, this is just one of them.

How would you like your first encounter with your favourite Autobot/Decepticon to play?

2 thoughts on “In My Prime Of Need”