Well, here I am, post-movie vibes and ready to write. I’ve been waiting for this since it was announced because I was anxious to see Transformers again on the big screen.

From the beginning, I did enjoy the Bay films, but overtime I grew tired of all the flashy action, overuse of the military and explosions, and longed for something with more of a story to it. I wanted to see actual robot characters instead of nameless Decepticons. I believe I got most of what I wanted after seeing Bumblebee.

Of course, I found the movie to be really enjoyable; If you grew up in the 80’s, or have converted to that era of the franchise no matter when you were born like me, this movie will definitely please you. 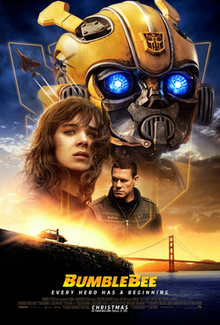 The plot started off really strong with the war waging on Cybertron and as soon as I saw Bee, Optimus, and what looked like Ratchet fighting, I knew I was going to get what I wanted out of this movie. Then, we see Soundwave and Bee is sent to Earth to establish a base. He undergoes some mishaps when he runs into Blitzwing who destroys his vocal processor and loses his memory. Fast forward, we meet our human protagonist Charlie Watson played by Hailee Steinfield who is an outcast teenager going through a rough time in her life and she wants to have a car for her birthday. She befriends Bee while two Decepticons: Shatter and Dropkick work with Sector 7 to locate Bee, but they actually plan to use him to find out where the other Autobots are and then send the remaining Decepticons to Earth. So yeah, in short, teen wants a new car, turns out to be an Autobot, then we have this military faction that assumes hostility of any E.T. beings before they even attack, and two manipulative Decepticons who want to find out where the Autobots are and bring the war to Earth once they learn Bee is headed there. It’s a story definitely not like your big army battle with a lot of effects. It’s a straightforward plot with good character development, speaking of which.

So, one thing that I thought made this movie even better was the characters. Some people still don’t like the idea that this movie still had more human scenes, but for me, it depends on how interesting the human characters are. Unlike Sam and Mikaela, Charlie was a human protagonist that I liked almost immediately. She had been insecure from her father’s death and couldn’t move on when her mother remarried. I also loved how she was an outcast instead of someone trying to fit in and impress their crush, hence I can relate to her more. Previous human protagonists like Sam and Jack from TFP were like the latter and get tied up in the mess with the Autobots. I grew bored of those types of characters. She also has great music taste too!

I didn’t like John Cena’s character, not until he realized his wrongdoing towards Bee. Just your typical army guy who wants to shoot anything that moves that isn’t human. But one thing just as praiseworthy for characters is the fact that instead of getting our typical dose of Megatron, Optimus, and the most well-known Autobots and Decepticons that fans from the bandwagon can easily figure out, we get something different like Blitzwing, Shatter, and Dropkick who were all great to see. In fact, I mistook Blitzwing for Starscream in the trailer! Optimus also does appear a couple of times briefly, but the best times were at the beginning and end. He is just the way I like him.

As for Bee himself, one thing I greatly loved about this movie was how he grows as a character. Charlie takes him in and their friendship is the peak part of his growth. He finds a bond with the girl and I nearly teared up when they share a hug after she tells him what happened to her father. A lot of people seem to prefer characters like Bee and the other Autobots to be battle-hardened soldiers that are almost incapable of showing human emotion. But for me, I like to see those types of characters express a soft side. It shows that anything alien, can learn to be more human by having feelings..

That, ladies and gentlemen, is why I didn’t like how Optimus became so violent in the Bay films as they went on. Maybe now if you want to continue to tell me to rethink my thoughts, maybe reading this will finally make you back off.

The biggest highlight that made me love this movie was the opening action scene on Cybertron that was thrilling. For others, it brought nostalgia; like I said, it was a very strong intro. We got to see the Autobots and Decepticons locked in battle: Optimus, Bee, and Arcee. Then there was Shockwave, Soundwave, to name a few Decepticons. All of them closely resembled their G1 counterparts. As soon as I heard Soundwave’s voice, I got so excited to hear it again after being disappointed that his last voice in the other movies didn’t sound as robotic in the cartoons and games!

Another great thing about this movie is the comedy is not overdone. There are still some funny parts, but there was something about them that made them more memorable to me than in the Bay films. For example on the beach, Charlie tries to teach Bee how to hide in disguise when other people are around, and the time he eggs and totally destroys that popular girl’s car to help Charlie get revenge. I truly hope in the future that if this movie gets a sequel with more Autobots present, they are treated more like characters. Charlie never treated Bee like a pet, she treated him for what he was and I like that.

There is also a massive 80’s vibe to this movie. Not only does it take place during that decade, but the soundtrack is full of that kind of music too. A complete appeal to anyone who were born in that decade. The biggest highlight was when Charlie was being encouraged by all those popular kids to dive off the cliff. She used to be on a high-diving team until her dad died, which made her quit. Bee plays Stan Bush’s “The Touch” on the radio to encourage her. Even though she didn’t dive, I still liked that part. It really gave my friend an attack of nostalgia when we were in the theater!

Instead of our traditional antagonist that is Megatron, we instead get two Decepticon assassins: Shatter and Dropkick. The only female Decepticon I know is Slipstream, so it was nice to get another one. Let alone, I didn’t know these guys until the movie came out. But they were dead set on finding Bee when they came to Earth that they even tricked Sector 7 into allying with them. They’re definitely cunning villains, but their rapid growing alliance with humanity leads me to the only thing I didn’t like about this movie: how that alliance grew so fast that Sector 7 already had the high-tech Cybertronian material provided to them to locate Bee. But then again, if it took a longer period of time for their alliance to be secured and grown, the movie would have been a lot longer!

It wasn’t until they revealed their true intentions, and Charlie and Bee went to stop them from contacting the other Decepticons did I start to like them as villains.

So, that’s my spiel on the new Bumblebee film. I can tell you right now that I absolutely loved this movie. This is exactly what I wanted in a Transformers movie: a good story with good character development. Anyone who is a Transformers fan longing for something more appealing to the classic generation, this is definitely a movie for you. If you’re not a fan, this movie might just make you one, hell there were a lot of children in the theater who had probably never seen any TF films so I welcome them with open arms. If you’re more into instant action then this probably isn’t for you.

If we get a sequel, I hope it has more Autobots and Decepticons in it, but continues to stick to putting the story first.