We all had those things that scared us as kids in movies and TV shows. They made us plug our ears, cry, bury our face in the cushions, or even run out of the room. Been there, done that.

I used to watch a lot of movies as a kid. It was all I wanted to do on Friday, Saturday, and Sunday nights. But, there were many times where there were characters that made me do one or more of the following things mentioned above.

Eventually, I was able to get over those fears as I got older, can watch those villains easily, and now I will share them here.

Surprised? When I was a child I loved Babar, I read some of the books, watched a bit of the series (I think there was more than one series), but this movie stuck with me the most as I went on to adulthood. I think it’s meant to be a standalone film in the franchise. In general, Rataxes was never an intimidating villain, in the series he had a family and he and Babar were rivals, but occasionally situations would arise where they would have to put their differences aside to solve a conflict for the greater good.

Not in this particular movie. Rataxes is seen as a darker villain; ruthless, manipulative, and tyrannical. In the picture above you can tell he means business as he makes his grand entrance and I must have realized that as a child when I first saw this movie.

His rhino soldiers burnt down that village Celeste and her mother were visiting, and as an adult, you can look at that scene and it seems pretty dark for children to be watching. I mean look, they were burning or knocking the houses down, they snatched away the elephant children and no one knows if they escaped or not. The adult elephants were captured, stripped of their clothing, and enslaved.

I felt disturbed as a child watching that, but Rataxes himself was still more intimidating to me back then with that bad temper and menacing laugh aside from his war-hungry personality. Fun fact, I’ve actually been planning to watch this movie again, well why not? I know it’s from children’s books but still it has a lot of memories for me, and now that I look back at it, I actually like Rataxes as a villain now in this particular movie. The name Rataxes has a nice ring to it too you know?

2. The Skullasaurus (Pooh’s Grand Adventure: The Search for Christopher Robin)

Okay, this isn’t really a villain, just a figment of our imagination when our stomachs gurgle. But, oh man I look back now how scared I was of this one.

It was mainly just that growling that frightened me, even if it wasn’t a real monster in the movie. I would have trouble sleeping at night as I would hear that growling and my mind would frequently picture what the Skullasaurus would look like if it were real.

The scariest moments and sounds also depended on the environment at that time. For example, just before Pooh and company go back inside the Skull Cave (which they actually slept inside the night before) to search for Christopher Robin. They look inside the cave seeing how dark and eerie it is, and then you hear the growl. That one stuck with me the most before they ran into the cave.

The other part was when the gang, except Pooh meet up in the cave and hear the growl again. They look up to see a figure reflected on the crystal wall and believe it to be the monster. Then the shape of it becomes scarier as it seems to come closer and they run away. But in reality, it’s just Pooh’s distorted reflection of him walking on the other side of the crystal wall.

3. Dragon (The Secret of NIMH)

Dragon is more of a secondary antagonist and only poses a threat once in the film. I think it was Don Bluth’s intention to make Dragon vicious as that is what cats look like from a mouse’s perspective. I’ve seen it in Cinderella, and other animated films revolving around mice, but they were nothing compared to Dragon. Lucifer from Cinderella was pretty hostile, but if you compare him to Dragon, he was more comical while Dragon is meant to be taken seriously.

Dragon looks like a rather old cat and maybe blind in one eye? I wanted to ask myself during the chase scene, why was he roaring like a lion? Maybe that’s all part of how we see it in the eyes of a mouse, how the cat is meant to be frightening because cats like to eat mice. He would also frequently pounce forward where his open mouth takes up the whole screen when you watch.

I used to be terrified of scenes like that as a kid, but Dragon clearly won in terms of how many times creatures would do that in movies. The whole add-up of his rather ugly appearance and vicious nature in the eyes of a mouse is what makes him terrifying enough for me to not watch the scene at all as a child.

I’m glad he spent the remainder of the movie sleeping afterwards!

4. The Evil Queen (Snow White and the Seven Dwarves) 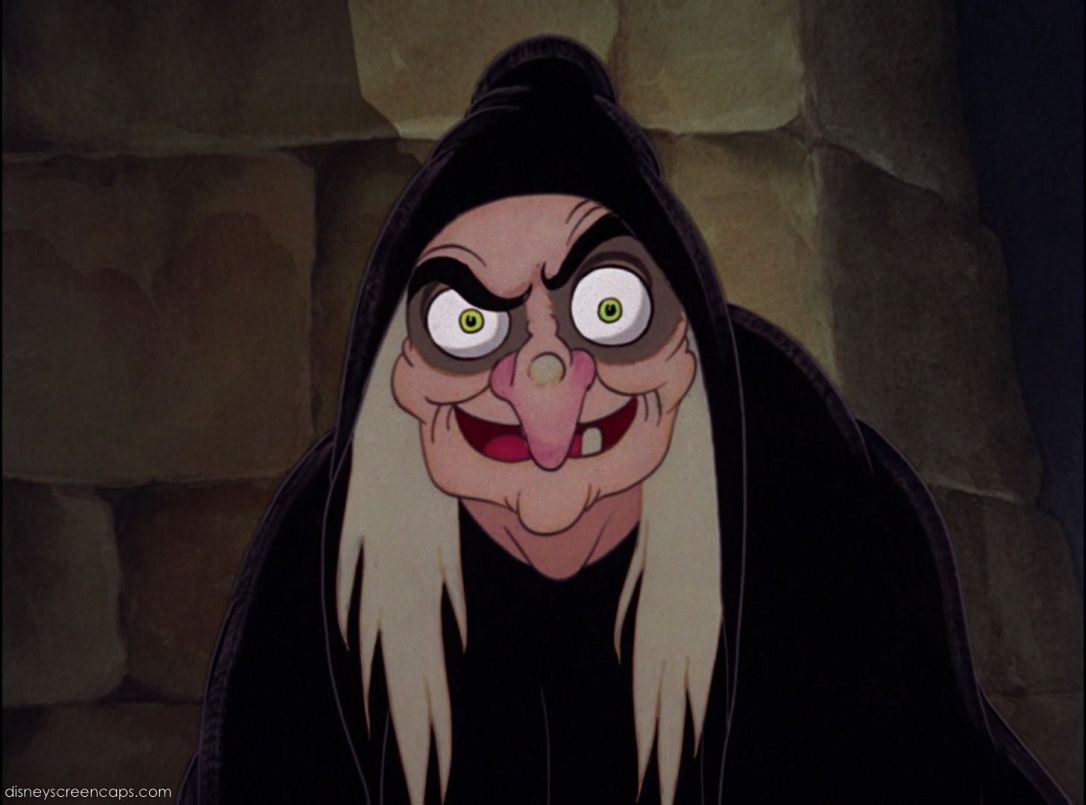 Who WASN’T scared of her as a child? The evil queen isn’t too scary as her normal self, but when she decides to disguise herself as an old hag, that’s when she becomes intimidating to every child who saw this movie.

She was jealous of Snow White’s beauty and fairness and decided to get rid of her. When the huntsman failed, she took upon the task herself by going to the cottage in disguise to poison Snow White. It was the combination of her ugly disguise and wicked cackle that everyone feared.

Not to mention the scene itself where she makes the potion and transforms, is eerie at its finest. It’s hard to explain but I remember she was one of the scary villains of my childhood that I never looked away from. It’s like I forced myself to because I still loved the movie as a whole. I watched the movie because I love Snow White as a princess and the movie itself had hilarious moments that still make me laugh today. It being Disney’s first feature length film, it can still be seen as dark with the evil queen’s actions and the scene when Snow White gets lost in the woods and sees everything haunted. Even today, I still find the queen scary but unlike the other three villains, she’s not someone you get over easily!

And those are my top 4 cartoon villains that scared me enough as a child to make me run, hide, or lose sleep. In spite of that, I’m glad they were part of my childhood, because now I like them as an adult. You begin to appreciate and understand the elements that made them frightening in the movies, and that’s what makes you want to watch the movies again.

What are some of your childhood villains that scared you?

5 thoughts on “Childhood Villains That Scared Me”