Hello everyone. I haven’t played Stardew Valley in over a month now since I’ve been heavily focused on Witcher 3’s Blood and Wine DLC, but last time I played, a lot has happened since my first update so I think it’s time to share another before I return to the game.

This time, a lot more social things have been happening from heart events to holidays.

I’m still building my farm, but I feel it’s been a slow process as I’ve finally been able to upgrade my axe to get more hardwood required for buildings, so the barn will be ready soon.

In the fall I found the golden pumpkin in the maze no problem. There’s always a hidden passage somewhere! That was the Halloween event. I also won the winter fishing contest!

Also in the winter, it was tricky to get by without being able to grow crops. I resorted to lots of foraging, fishing, and mining before I was able to make and find winter seeds. Eventually, I made it low enough into the mine to easily find ore I needed for crafting and upgrading tools other than copper.

I’ve also been hoping to establish a field next to the one where my crops grow and use it for fruit trees but that might take a while.

I finally discovered how to use my hoe to search suspicious spots. But in the end I’m glad I made it through the winter without running out of hay. 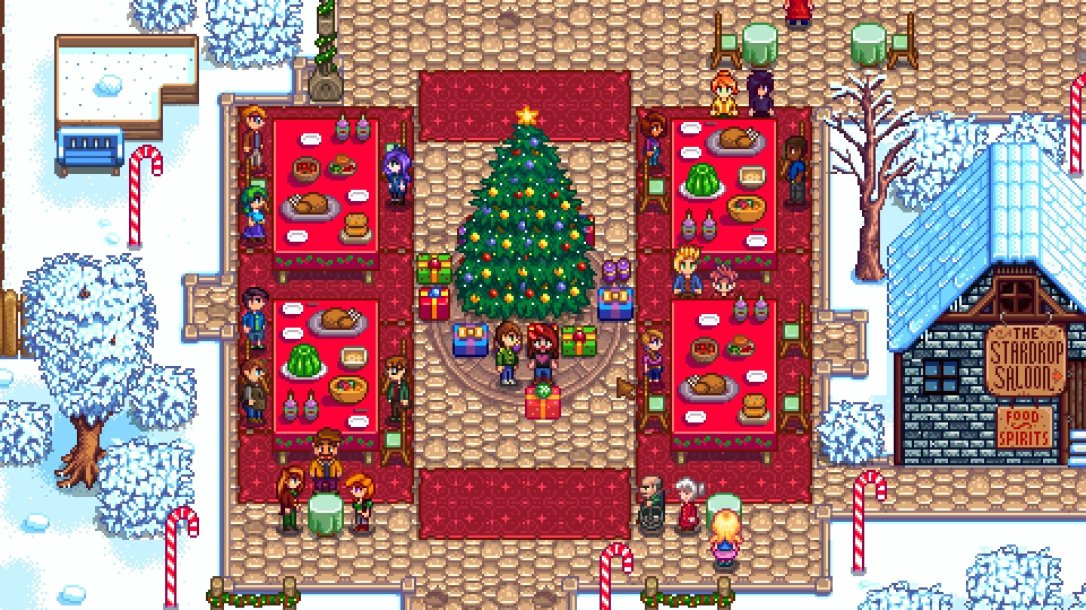 For the Winter Star Feast/Christmas event I wanted to get the right gift. My receiver was Leah, and I originally wanted to give her a plant she liked, but I gave it for her birthday instead and witnessed her arguing with her ex who begged her to come back to the city.

So I gave Leah a bottle of wine and Alex was my secret Santa and he gave me beer. But I still prefer mixed drinks with rum, vodka, or gin when it comes to alcohol. The taste of beer and wine never appealed to me.

For relationships, I appeared in Emily’s dream and she had a sudden inspiration.

Truth is in my last post, I never talked much about any heart events from the female NPCs like Haley arguing with Emily, Leah’s art and her ex, those were interesting.

Then Abigail invited me to play a game with her. We never beat it but she thanked me for trying. Penny also was trying to help George out and I stuck up for her when George scolded her for helping him.

Then I walked in on Shane lying on the floor hung over. Marnie kept asking him what he was going to do with himself and this caused Jas to run away crying. Those were all very absorbing events for me.

Elliott finally finished his book and it was a sci-fi novel that he read to the town. He said he dedicated it to me and now I knew I wanted to spend my life with him. I decided to wait till spring so I could focus on getting through what remained of winter and kept a bouquet in my house.

Come spring, I gave it to Elliott and he became my boyfriend. We’re going to take it slow together and it’ll definitely lead to a loving relationship. I’m looking forward to what that brings.

One last thing worth mentioning before I close this off is I completed one of the bundles.

So now the bridge to the quarry has been fixed. I realized that there were too ways I could start restoring the town: it was either complete the bundles inside the community center that would also restore the building itself, or buy membership with Joja Mart which they would turn the community center into the warehouse and all you had to do was pay them a certain amount to restore the town.

I chose to commit to restoring the community center because, I don’t know, I’m just a sucker for doing what seems like a democracy. I found Pierre’s store to be a lot more convenient to shop at despite Joja’s lower prices. But there are two sides to the coin, some of the NPCs prefer Pierre’s and others like Joja. I also realized that the game begins with you leaving your job at Joja to go to farming so, yeah seemed like a logical choice to me.

Oh and I almost forgot I found this little secret area in the woods and I just love the soundtrack there that you might see it on this month’s music post! I can get lots of hardwood there!

So yeah that was my first year on the farm. I’m looking forward to what this year brings so I better get back to playing!