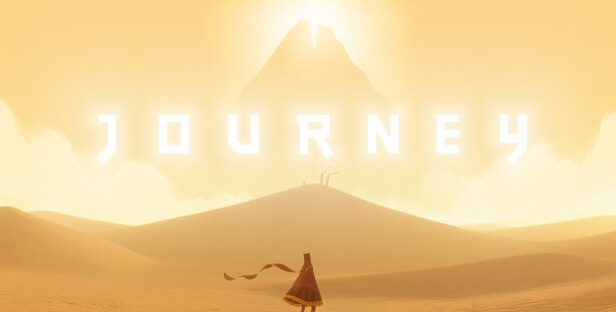 I don’t know how I didn’t discover this game sooner. It’s made by the same devs who did Flower, which is a beautiful and relaxing indie game I love with a heartfelt message behind it.

Journey is very similar and it is the first game I have played on my Steam Deck. It performed very well for a debut on the device.

Journey is a simple adventure game where you travel through a desert towards ancient ruins and the summit of a mountain to learn its secrets. Along the way I saw visions of my traveller standing beside a taller figure in white like an elder of whatever species these people are, aiding me as I made my way towards the summit. At times, the cutscenes also served as a warning of what was to come.

It’s easy to get into and you can find glowing symbols that extend the length of your scarf, allowing you to glide for longer periods of time. I also met various cloth creatures that would regenerate the glyphs of my scarf that were also required for gliding. The jellyfish ones were my favourite for the cute little sounds they made when they spun around whenever I made contact with them!

My favourite level in this game was the ancient city where you slide down the sand dunes with many of those cloth birds following you. On my second run, I was able to pass through enough gates to earn an achievement for it! In the underground passage that followed, the easiest way to avoid the guardians that could tear my scarf was for me to stick to the left side of the tunnel, but evading them was much harder in the summit level!

The game also has a small multiplayer aspect to it, as sometimes in my journies, I would encounter another player and we would travel together. That’s all there is to it and since I am not into multiplayer in general, this is a good thing that they kept it simple. It took me a while to finally run into someone who would meditate with me in the game too.

My least favourite part was the level in the snow, as I said, the guardians were harder to avoid, the strong winds were relentless, and I even got lost the first time navigating where the guardians were. But, that part made me understand the cutscenes at the end of each level where it showed me what lay ahead, and some of it was perilous.

That’s where the story got emotional, sometimes you try and you fail. But the devs decided to still make it a game with a pleasing ending so you get another chance to make it to the summit.

All in all, it’s an easy but beautiful game with a great soundtrack, fun gameplay, and nice touch to encounter other players as you travel. Well done for the first game I played on my Steam Deck, however, it’s also quite short, if it was just a wee bit longer, then I would consider giving it a perfect rating.

7 thoughts on “Journey – I Fly To The Top And Back”