Throughout the course of the semester, I had some pretty interesting dreams, but I had to sacrifice writing about most of them due to school commitments. When exams were around the corner, I would turn in early and found myself having many strange dreams.

But, this dream, oh man this feeds my nostalgia that led to my love for dragons by the time I was 14, so I have to share it.

Sometimes I think that I’ve loved dragons all along despite denying it in earlier years before I was that age.

Last night, it was about this one: 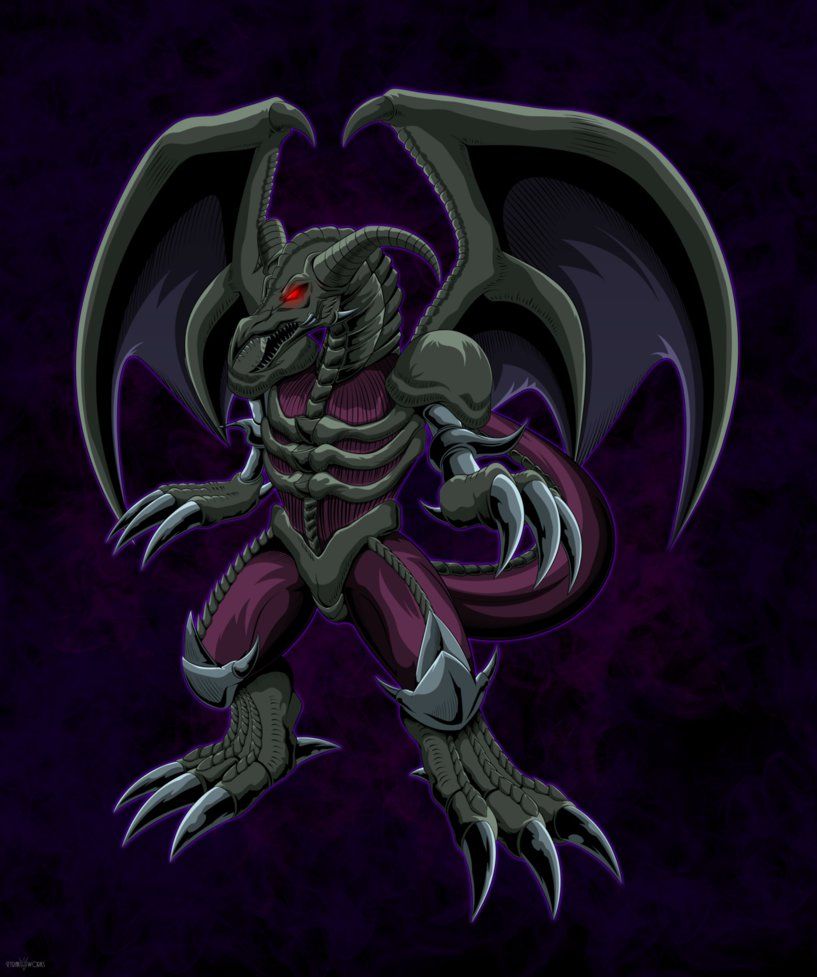 The Black Skull dragon, combined with the Red Eyes Black Dragon and the Summoned Skull. I first saw this one in the Yu-Gi-Oh episode when Yugi and Joey duel in the tournament semi-final. Joey brings back Yugi’s Summoned Skull, copies Yugi’s fusion card that can be used to fuse two compatible monsters together, and combines him with his Red Eyes.
My lord, how do I even remember this? What can I say? It’s one of my many talents!
Anyway, the dream started where I was in the park in my neighborhood. It was a bright sunny day and summertime. The park looked the same as it does in reality, but from what I remember, the playground was the same as it was when I was born. But, the only difference was that there was a huge cave in the back instead of the houses that would have been at the edge of the park.
I wandered inside because, well you know I am a curious kitten. It wasn’t as large as I thought inside, and there were bones littered on the ground like. Already that gave me a bad feeling that something was living in there. There was also a lot of larger bones; some of them looked like broken ribs from a massive creature and round turtle shaped ones like shoulder pads. Then the silence was broken by deep breathing. Despite it being such a small cave, it was still too dark to see what was fast asleep before me.
You know, this dream reminds me of our fairy tale unit in English class. I wanted write a story I had put together mentally from my Dragon Master fantasy where I get stranded on this island inhabited by four dragons. In order to get off the island, I had to find a golden crystal on the highest mountain in the heart of a dragon’s cave. So ventured into that cave and found the crystal right by a large black dragon that was asleep. I nearly woke it up taking the crystal but only once I started to leave did it awaken and give chase. Unfortunately I had to cut most of the story out of the project so I wouldn’t exceed the page limit that my teacher expected of us.

Anyway, back to the dream. I took a few steps back once I heard that sound and decided to leave. As soon as I was back outside I began to walk away slowly but that noise did not cease, in fact it grew louder until a great roar echoed across the park. I broke into a run out of the park and down the street. I knew it had to be the Black Skull dragon because the sound of its roar in the anime is how I remember it.

I heard its footsteps gaining fast and did not bother to even go in my house knowing it would destroyed in the dragon’s path.

That was when I suddenly transformed into my form of the Dragon Master. I turned around to face the Black Skull dragon but it roared ferociously and didn’t look like it was ready to answer to me. I quickly ran until I could fly and flew across the ravine. I find that in some of my flying dreams that take place in my neighborhood, I always seem to flee across there for some reason. They’re suspenseful; as there is always something different awaiting me beyond those trees where the ravine is, but not as memorable as the high-flying ones. All the while I heard tree branches breaking behind me as the dragon smashed its way through them and as I crossed the river, that was when its burst of molten fire came from its jaws.

I flew faster and was heading straight towards a wasteland. I don’t know what happened after that, but if the dream resumed there, I would have fought that dragon in that open space until it was wounded enough to succumb and answer to me.

Well, let’s see how many people know this dragon shall we? I love it when posts like these contain something that others may have grown up with.